After a Brief Hiatus...


Oh yes! I am finally back after, oh, how many months? So much has happened since then. I could write about the call from a gentleman from my church the evening after I published the previous post. (You probably would need to reread said post in order to fully comprehend the significance.) I guess he read my blog (maybe because I sent it to him?) I could further tell you how that relationship has developed to the point that we will begin premarriage counseling with our pastor (as soon as he-the pastor-gets back from Uganda where he performed a marriage ceremony for over 40 couples). But no. I will instead save that for a later time and treat everyone to a couple of book reviews. Please enjoy! 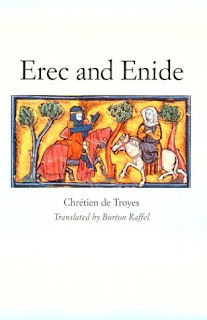 This translation was fast-moving and easy to read. It is a typical Arthurian romance that, simply put, depicts the women as unbelievably beautiful and the men as the epitome of chilvary and bravery.
It is interesting to note that the hyperbole used to describe the woman's beauty, Enide's in this instance, almost renders the author at a loss when he needs to describe another beautiful lady. How do you outdo your description of someone who is more beautiful than any other woman?
What sort of bothers me is the method used to describe the ideal man. His bravery means cutting down other knights. I can't help but feel sorry for the men who lose honor and have to live in shame because they couldn't defeat this one knight of unsurpassed greatness. It seems his merit is built at the expense of so many other men.
At the same time I know that we need to take the story in its historical context. The ideal woman is more beautiful than any other woman and the ideal man is braver and stronger than any other man.
Chretien de Troyes is focused on presenting these ideals rather than making any moral point which, to me, makes it less interesting. What I enjoy about Sir Gawain and the Loathely Lady is how Gawain proves his inner character by keeping his promise even if it means marrying an extremely ugly woman. Or as in Sir Gawain and the Green Knight: Gawain keeps his word, even if it means his death.
Just being the best in looks and athletic prowess, while certainly mirroring today's shallow values, does not invoke me to feel particularly attached to the protagonists of Erec and Enide.
Still, Chretien does present two very happily married people, even if the joy is interrupted by Erec needing to go out and prove himself to his disgruntled fellow knights who think that he has forsaken all that makes a knight a knight by spending all his time with his wife.
And finally, it is always interesting to read and learn about the mentality and culture of a distant time even if I don't completely understand or agree with it.
I would recommend reading this book just because it is the earliest written rendition of Arthurian legend. Reading as many different sources as possible enables us to see the development and changes of these stories as writers continued to record them over time, from the medieval ages to the renaissance. 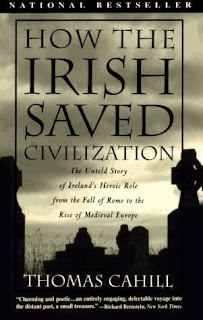 As with all historical research you cannot rely on one source of information and it is important to look in the back of the book to see just how many sources the author used as well as what sort of sources.
Having said that, I found value in this book because it filled in gaps for me about the thousand years after Christ and traced the growth and development of the Christian church and European civilization. I have always been fascinated with how Europe went from being barbaric tribes to the sort of people who wrote Arthurian romances that embodied the ideal of manners, behaviors, and values so very much more sophisticated and merciful than the warring tribes that once populated (terrorized?) the continent.
Enter Thomas Cahill: According to him it was the Irish who started the ball rolling. How did they do this? By converting to Christianity, thanks to St Patrick.
Cahill actually starts back with the Roman Empire and how the church grew even as the empire declined but he contends that the Catholic church in Rome was not responsible for the advancement of European culture. Instead, this occurred after Ireland started sending out missionaries across the continent.
Cahill gives a thorough history of St Patrick's life and missionary work among the people who once enslaved him. I now feel I know a lot more about this early missionary than I had previously.
I suppose there is a fair dose of Irish snobbery in Cahill's pronouncement that it was the Irish who delivered Europe out of the dark ages but he does go into detail as to what monks went where, what the condition of the continental kingdom was prior to the Irish missionaries as well as after and also describes the ineffectualness of the Roman missionaries in the same areas. (I'm merely describing what he wrote not necessarily my opinion, I would need other sources to read first.)
Finally, Cahill has what I would describe as a typical Irish sense of humour which can border on the irreverant if not outright bawdy. Depending on who you are you'll either enjoy or be offended by it.
As I said, I wouldn't rely on this book as a sole source of early European history but it is certainly worth reading for those who are interested in that epoch of time, as I am.
Posted by Sharon Wilfong at 10:57 AM 2 comments: