Here is one of my favorite pianists, Glenn Gould playing J.S. Bach, the Well-Tempered Clavier. 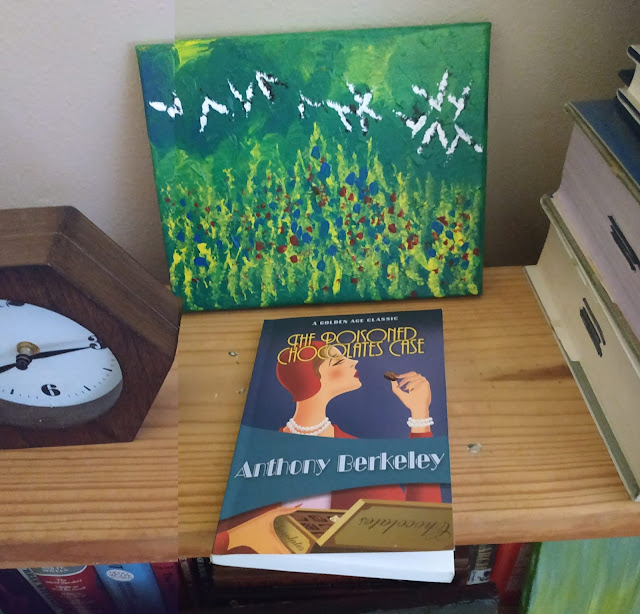 This was such a fun read, I raced through it.

Sir Eustace is sent a sample box of chocolates to his club. He is disgusted anyone would send him something so trite, especially since he doesn't like chocolates. Next to him is Mr. Bendix. Mr. Bendix has lost a bet with his wife and owes her a box of chocolates. Might he nab the box and give it to her? Why not save a few pounds, he figures.

Sir Eustace gladly gives him the chocolates and Mr. Bendix takes them home and gives them to his wife who proceeds to help herself, insisting that her husband eat a couple, which he does out of politeness. He does not care for chocolates.

On his way back to work, Mr. Bendix becomes violently ill and ends up in the hospital. When he finally is released, he discovers his wife is dead.

The chocolates were laced with poison and the immediate conclusion is, who was trying to kill Sir Eustace? After all, they were sent to him.

The police investigate but come to a dead end.

Enter a criminologists club. This is a group of men and women who solve murders as a hobby. One member is a lawyer, but the rest are mystery writers.

What ensues is a couple of chapters devoted to each member as they solved the crime. Not only do they solve it to their satisfaction, but they also demolish each other's theories to their own satisfaction.

However, one of them turns out to be right and the ending is satisfyingly unexpected.

Here is Sephardic Spanish music from the Middle Ages.

Below is an acrylic painting.  I call it "Birds Flying Over Flowers." 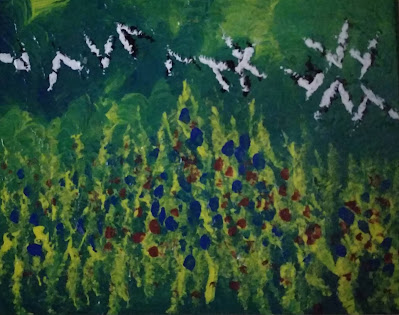 Well, I finally set up my Etsy shop.  I'm selling my paintings there.  It's called FongArtStore.  Yes this is a shameless plug. 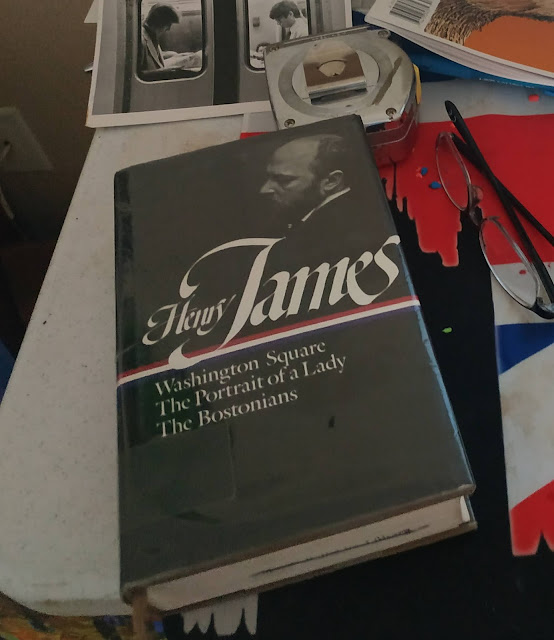 I had forgotten why Henry James is one of my favorite authors because it's been a few years since I've read him. This novel reminded me.

As the blurb says, a successful Doctor becomes the unwilling widower of his brilliant wife, whom he adored. His infant son, upon which he lavished so much love and hope, also dies. All that is left is a daughter who is destined to disappoint him.

Catherine turns out to be everything the Doctor expects of her. She is unattractive and simple minded. He shows her no affection and plenty of contempt. Therefore is it any wonder that the first man who comes along and showers her with attention is met with Catherine's immediate amazement, then devotion?

But is this young man, Morris Townsend, as good a person as his looks are handsome? We don't know at first. Catherine's father thinks he does and makes it clear that if Catherine is so stupid as to marry an obvious gold digger, it won't be his money the man will be digging.

Hence begins a battle of the wills of three people. Four actually, because the Doctor's sister, Mrs. Penniman inserts herself into the drama with all the thrill of an aging widow who yearns to be part of a romance. Another way of putting it is to say that Lavinia Penniman is a tiresome busybody that further muddies the waters with all of her vague insinuations and half said implications and assertions.

It eventually becomes evident to everyone that the future is going to become bleak for everyone involved. I am not going to say more in case people haven't read the book.

What I love most about James' writing is is masterful use of language and perspicacious psychological studies. We see inside everyone's heart. We see the thoughts behind the words and actions and understand them to be dead on.

And he's suspenseful in his own way, because I read this short novel in two days because I couldn't put the book down for wondering how it was all going to turn out.

Puddle up my sleeve.  He likes to do this while I'm on the computer. 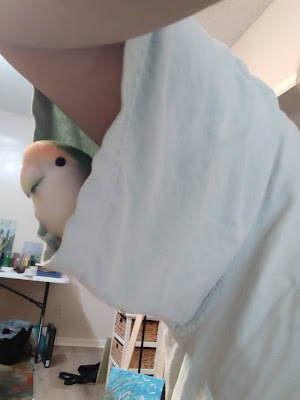 The Battle for Home by Marwa Al Abaquni and a few light reads I've been amusing myself with.

It was my birthday and hubby cubby brought me flowers!!  I love birthdays, they make me feel loved. 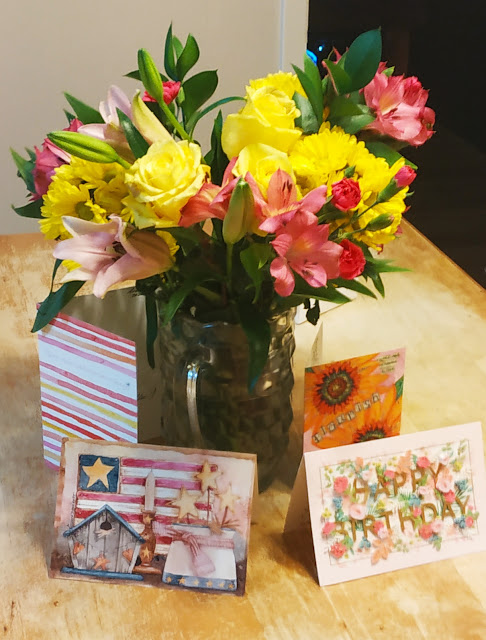 I've once again been reading books faster than I can write in depth reviews, so here are blurbs on the last couple of books I've read: 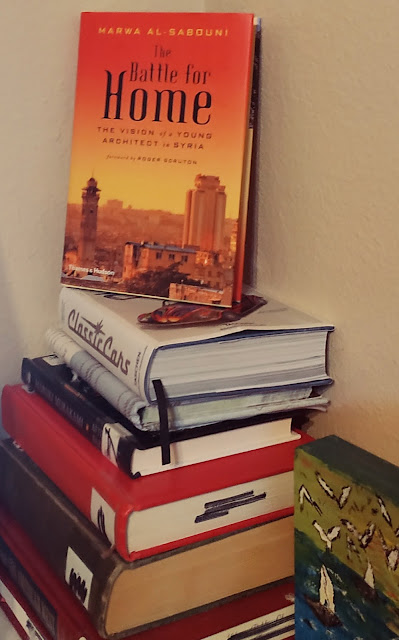 The author poses an interesting theory that architecture can bring a community together in harmony or create strife and division.

She asserts that before the government decided to tear down traditional, historical buildings and demolish neighborhoods, Christians and Muslims lived together in peace and with respect. After different government leaders decided to glorify themselves by destroying these buildings, and create horrible, lifeless, soul-less structures, it divided people and ushered in the war that has now ravished Syria.

She does not make it that simplistic, but that is the gist. Our living space matters in affecting how we think and live our lives.

I get that, but I also think that Isis and the government have other reasons for fighting each other. I think the destruction of the architecture was a symptom of a corrupt government that maintains power through terror. Isis are religious radicals who believe they have a God-given right to oust the leaders of Syria. The problem is their motives aren't to provide the people with liberty and opportunity, but to impose radical Islam on the country.

The people of Syria are caught in the cross fire. I wonder how it will conclude? After all of Syria is lying in ashes? 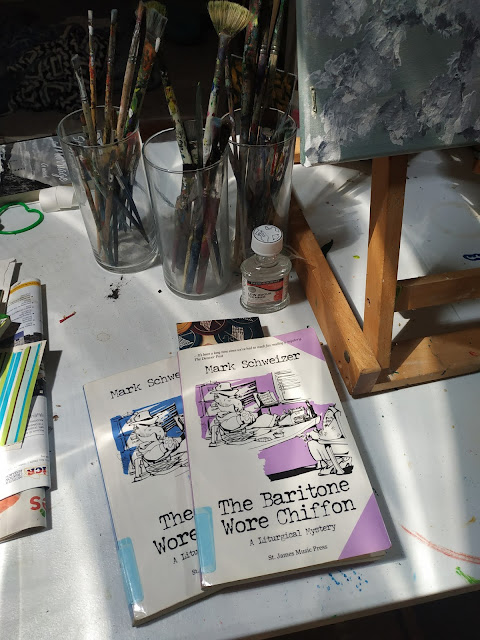 This is my second in Schweizer's liturgical mystery series. His mysteries are well constructed and he's as funny as all get out. Kind of a Mark Twain, if Twain were a mystery writer.

I just read the author died last year. A pity, because he's only written about twelve of these mysteries.

To complain: he hurls too many cheap shots at other denominations, but he does not spare the Episcopalian church and he lets his opinions be known about Nazi Feminists who become priests.

Willy, the curator is found dead in the choir loft. At first it looks like a heart attack, but then poison from the Oleander plant is found in his blood stream. Oleander is the plant that one of the choir members has been using to kill her neighbor's pet hedge hogs because they keep escaping into her yard. Then she cooks them into a stew to serve at pot lucks. Yuck.

But, the cook did not do it and it takes quite a bit of circling before we find out who did.
The following stories are on Hoopla and I listen to them on my phone while in my car or while I'm cleaning. 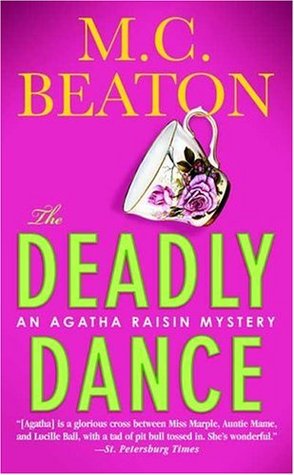 Agatha Raisin's new detective agency is just starting out. She's invested in an office, hired junior detectives and a secretary. So far their only client is a woman who wants them to find her lost cat.

However, things slowly pick up (a man wants to find his son, but only because he wants his car back) another woman wants evidence her husband is cheating on her and a young woman about to be married has received a death threat.

The last case is when things really start to escalate. Agatha and her secretary, Emma Comfrey, arrive at the engagement party and help the lady narrowly avoid getting shot at by a sniper.

Why would anyone want to kill this girl? Agatha is determined to find out. Meanwhile her friends, Ron and Sir Charles arrive to help.

The secretary Emma, starts out as a good ally, but she begins to show signs of instability as the story progresses.

In this book, the relationships Agatha has begun to cultivate in her Cotswold village are beginning to ripen and blossom. 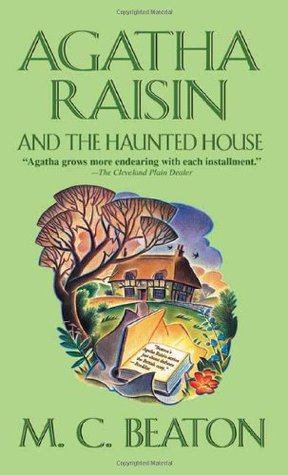 I enjoyed this story for the same reasons I enjoy all of Beaton's Agatha Raisin series. Agatha is so human. The dialogue is hilarious. And also I very much enjoy the narration by Penelope Keith. I have been listening to these novels while painting and cleaning my house, getting it ready to sell. It makes the time go so much faster.

After listening to Keith's wonderful voicing of all the characters, I don't think I want to read them anymore. 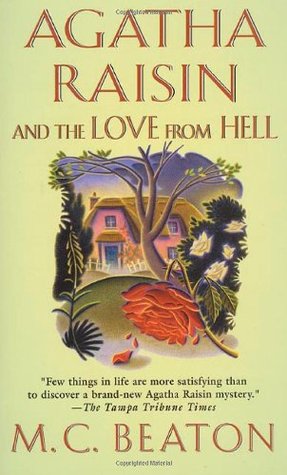 Poor Agatha. She's a middle aged over weight woman who has the same notions of romance as a teenager who devours pulp novels.

She's recently married, but her husband disappears. Not only that but the last woman he was seen with has been murdered. Did he do it? And where did he go?

Another great psychological study of psychopaths, but with the warmth and humor that makes me enjoy Beaton's novels.
Posted by Sharon Wilfong at 11:29 PM 10 comments:

Agatha Raisin and the Day the Floods Came by M.C. Beaton

Here is some Harp music for a change. 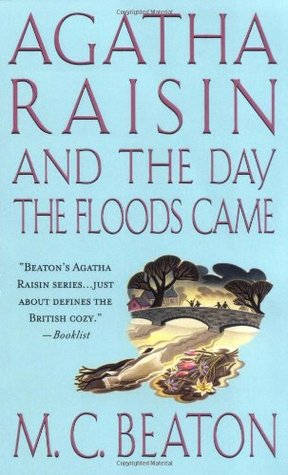 This is my third or fourth Agatha Raisin and she's beginning to grow on me. Agatha starts out on an island where she is drowning her sorrow over her marriage to James Lacy who has left her for a monastery.

She returns to England and new adventure. She goes to her pilates class, determined to get in shape, quit smoking and all round start fresh. In her class she overhears a pretty young woman talk about getting her legs waxed in preparation for her marriage. Nothing to remember.

Except that the next day there are torrential rains that flood the local village river and Agatha sees the woman from the pilates class floating down it in a wedding dress, holding a bouquet. She is frozen stiff.

What the heck happened? That is what Agatha Raisin is determined to find out.

In this book I see a very human side to Agatha. She is middle-aged, overweight and smokes too much. Her self-esteem is garbage because of her recent divorce. Then a famous author moves in next door. Hmmm....

He is a mystery writer and he is willing to help Agatha investigate this mystery of a frozen bride. He's her age....might he be interested in Agatha?

We learn a lot about Agatha, her vanities and her vulnerabilities as well as John the mystery writer. I enjoyed the interplay between the characters as much as the mystery.
Fall doesn't arrive here until November.  In the meantime I can at least paint and imagine. 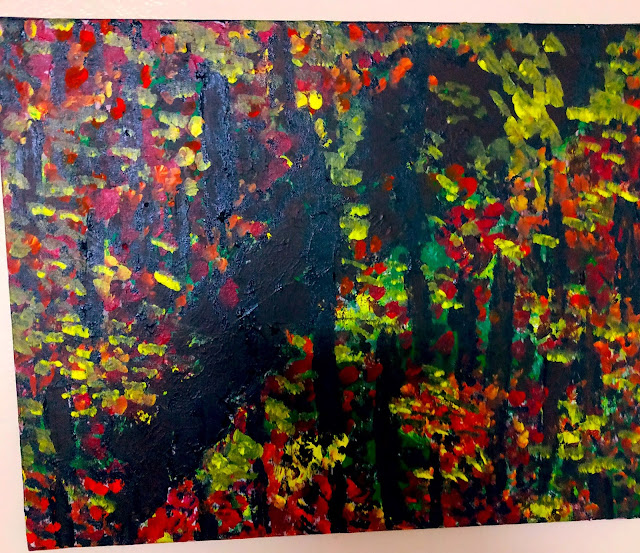