The Picnic and Suchlike Pandemonium by Gerard Durrell

Here's a Cello Suite by Bach 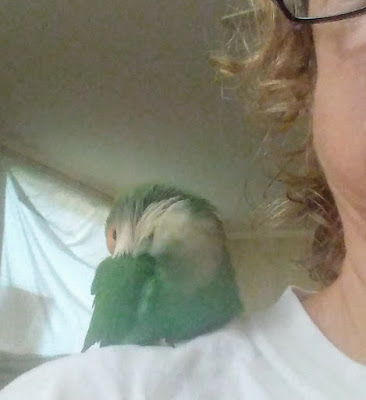 One of my little monsters asleep on my should while I write.

The Picnic and Suchlike Pandemonium by Gerald Durrell
My rating: 3 of 5 stars
This is a collection of unrelated stories written by the late British naturalist, Gerald Durrell. Unlike his other books such as, My Family and Other Animals or Birds, Beasts and Relatives, this set of short stories are more about his family and other assorted people he came across in his life and travels.

All of the stories contain humor, some more than others. The first two stories, The Picnic and The Maiden Voyage, are about his family going on an ill-fated picnic outing to welcome home his brother Lawrence, and an even more ill-fated tour on a Greek cruise ship. These two stories have humorous moments, although some of it seems a bit canned. The third likewise is a little cliche as he meets an old girlfriend in Venice and gets sucked into her zany life dramas.

Some of the stories show a glimmer of the brilliant writer he could have been had he applied himself and, he freely admitted he never applied himself for the reason that he hated to write and only wrote in order to provide a financial resource for his animal advocacy and protection endeavors.

I am speaking of the last two. The penultimate story, The Michelin Man is narrated by a chef in an obscure French village containing an even more obscure restaurant that nevertheless sported one Michelin star. The chef gives a fantastic story as to how his restaurant gained this coveted recognition. Is it true? Doubtful, but it was a great story!

The last story is in a class of its own and almost makes one wonder if Durrell wrote it or plagiarized the story from someone with real ability. In fact he presents the story as if it were a manuscript accidentally found by a book seller. It is titled, The Entrance and is a ghost story/psychological thriller that is spine tingling.

I read it on a rainy day and finished it at two in the morning, which probably added to the suspenseful atmosphere of that particular tale.

Do I recommend this book? Sure. The few well-written stories, especially The Entrance, are worth the price of the entire book.

Kraken: The Curious, Exciting, and Slightly Disturbing Science of Squid by Wendy Williams


Here is the inimitable Yo Yo Ma playing Shostakovich's Cello Concerto no. 1 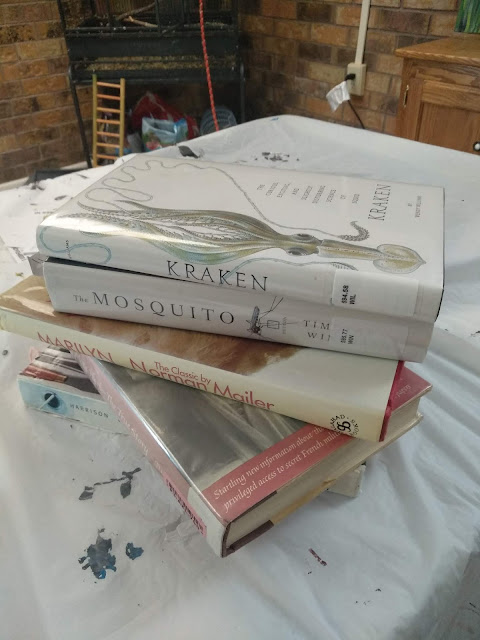 You may notice that the background of my photos will be different.  That is because Josh and I have moved into a nicer, larger house.  I am currently sitting in my art studio which also has the aviary, which means it is also my writing room. 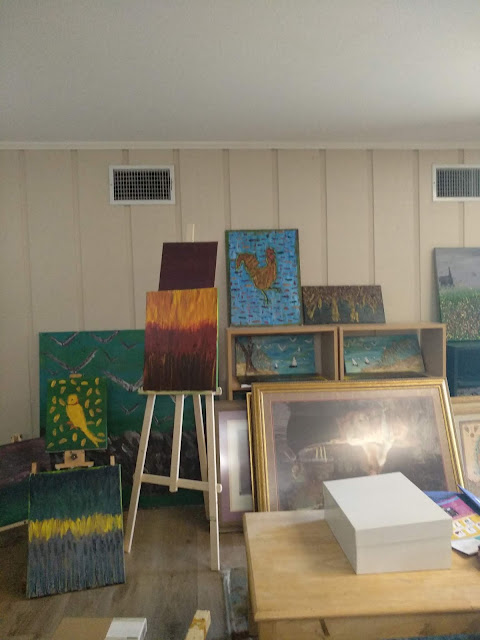 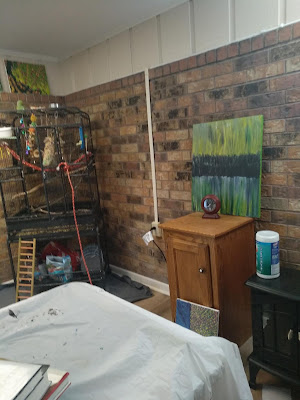 I am still unpacking and and putting up things, mainly books. This is my library.  It's on the second floor.  The movers were good sports about it, especially after we tipped them well. 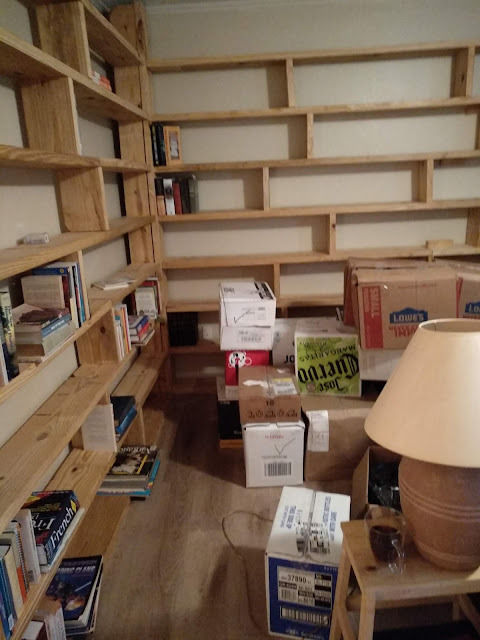 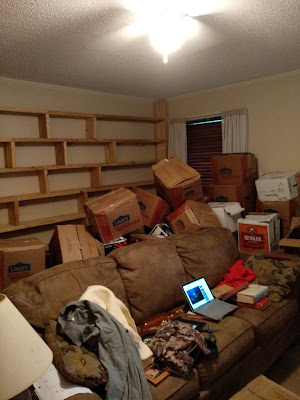 Did I mention my husband built the bookshelves?

Kraken: The Curious, Exciting, and Slightly Disturbing Science of Squid by Wendy   Williams
My rating: 2 of 5 stars
I give it two stars because it was OK. Not bad, not great. I was a little disappointed.

What was also interesting was historical accounts of eye witnesses of squid and the first discoveries of giant squid.

Apparently, however, that was not enough flesh out an entire book so Williams puffed it out with speculation on the origins of the species via evolution. We don't know that so...uninteresting.

I would have found it interesting if she had presented the theory of origins honestly, such as...scientists believe this, there's some argument about that, another theory claims this...no. It's all presented as fact upon which to base our knowledge, which is a waste of time because not knowing where squid came from or how long they've been on earth doesn't really change what we can see and experience about them before our physical senses.

Then, out of the blue, the last couple of chapters are about octopuses. OK. But what does that have to do with the previous several chapters?

Go ahead and read it, but with a critical mind.

After two days working like a dog.  Who needs a gym? 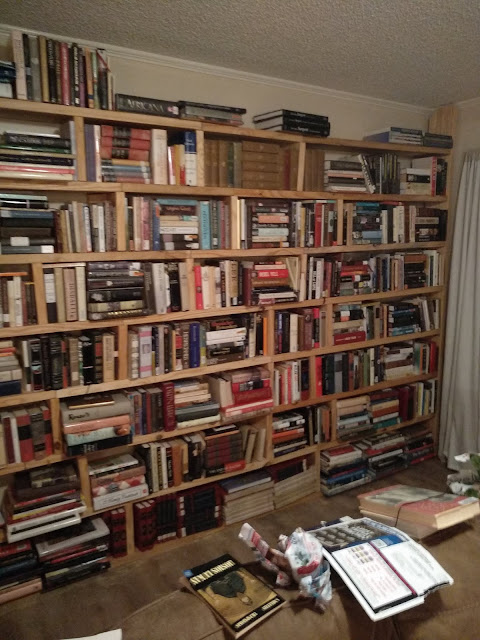 The Chee-Chalker by L. Ron Hubbard

Sorry for the late post.  Josh and I are moving houses.  We're glad to move into a place that better suits out space needs, but it's so tiring. 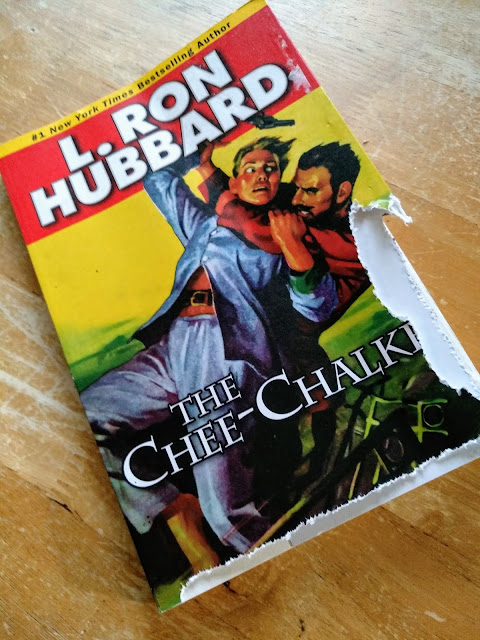 My lovebird, Puddle decided that this book made a cheap parrot toy.

The Chee-Chalker by L. Ron Hubbard
My rating: 2 of 5 stars
OK. I know the author started a cult. I even heard he started it as joke, but never mind.

I could not resist the cover and, who knows? Even cult leaders could be good writers.

Except in Hubbard's case, no.

I mean, he's a good writer, but the substance of his writing isn't very interesting.

Sure, he's got the hard-boiled detective, the sexy, bad girl who the FBI agent can't decide whether he should slap around or fall in love with, yeah, yeah, yeah. Oh, and some guy referred to as a Chee Chalker got murdered, which is why aforementioned FBI guy is in Alaska (did I mention this takes place in Alaska?).

There's interesting bits. The Alaskan culture of the 1930s, the glossary in the back is helpful so we know that Chee Chalker is a newcomer to Alaska. Siwash is an Alaskan Native American and so is Tlinget, at least the ones living on the coast.

The plot just didn't go anywhere. It was interrupted by too many drunken brawls, and too few clues to propel the story forward.

However, on the bright side, 'eye roll' there's plenty of Hubbard to be found everywhere. If I had bothered to look him up at my local library I would have discovered they had hundreds of his stuff on e-book. I wouldn't have even had to leave my house to find out he's not my cup of tea, much less waste three dollars (hey, three dollars is three dollars!) at my local Books A Million.


View all my reviews 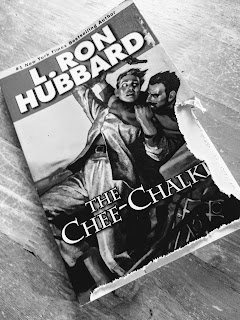 Look at his cute little face.  How can such a sweet feather puss be in reality a Edward ScissorFeathers 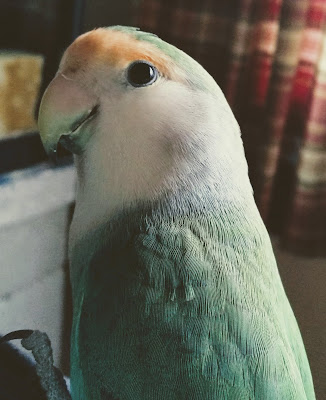 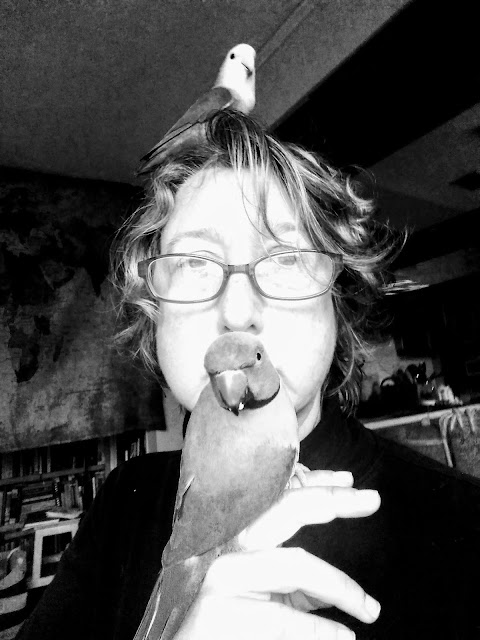 The Art of Writing: Four Principles for Great Writing that Everyone Needs to Know by Peter Yang

This week how about some Baroque Music from the Netherlands? 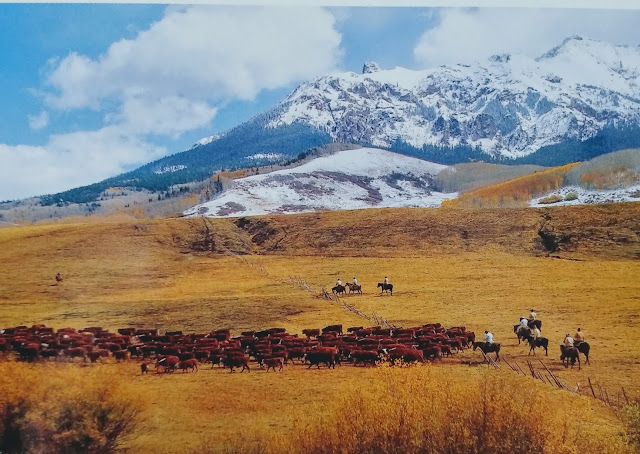 While the above post card was photographed in Colorado, it reminds me of west Texas.  Europeans can say what they want about America, but so far the favorite post cards world over are the ones I send out with cowboys.  A romantic stereotype, I suppose, but one that is enjoyed internationally.

The Art of Writing: Four Principles for Great Writing that Everyone Needs to Know by Peter Yang
My rating: 5 of 5 stars
This short book is highly readable and concise, but filled with valuable information for the aspiring writer.

I have been writing for several years and still found several bits of useful advise to help me improve my writing skills.

The book is broken up into four sections that deal with such topics as writing with active not passive verbs, good sentence and paragraph syntax, avoiding cliches or repetitive words. Yang shows the reader how to avoid these common pitfalls as well as others as well as methods of making our writing more vibrant, interesting and clear.

Included are good, concrete examples of dos and don'ts as well as examples of good writing from authors throughout the history of literature.

I heartily recommend this book for all writers who would like to improve their skills of expression on paper or the internet. 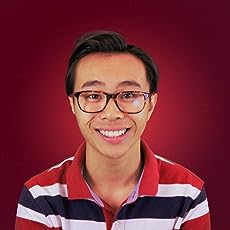 Here is more information about the author: 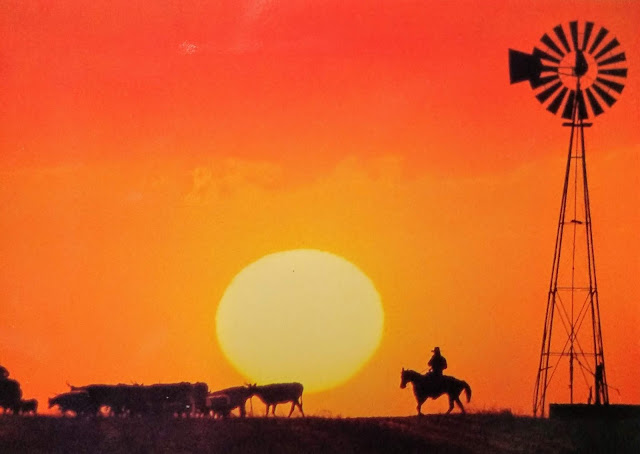 Here is the Mozart Clarinet Quintet in A major K. 581.

This past week was Mardi Gras.  To my postcrossing pen pals I sent the following postcards. I got a book of Mardi Gras postcards at a bookstore in New Orleans last September.  They are paintings of floats from Mardi Gras parades in the 1890s. 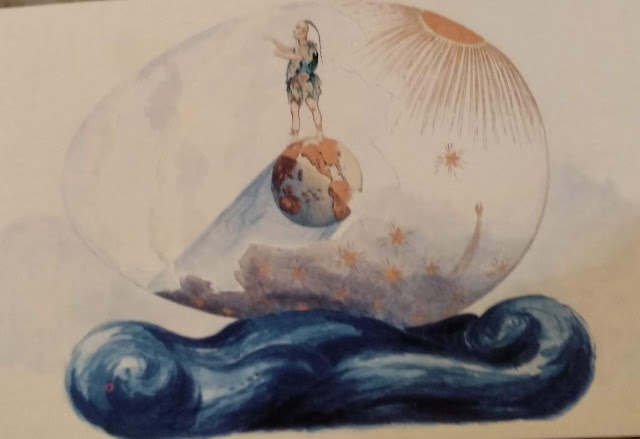 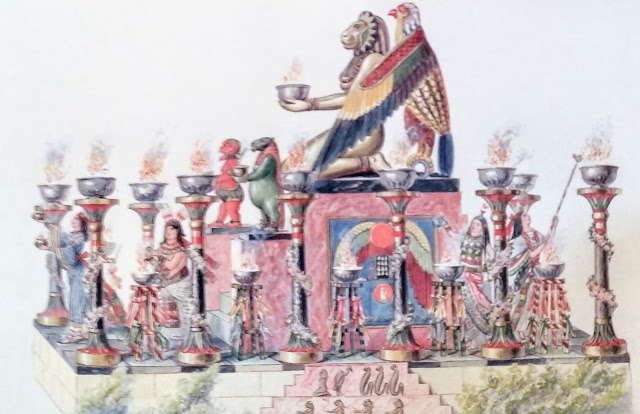 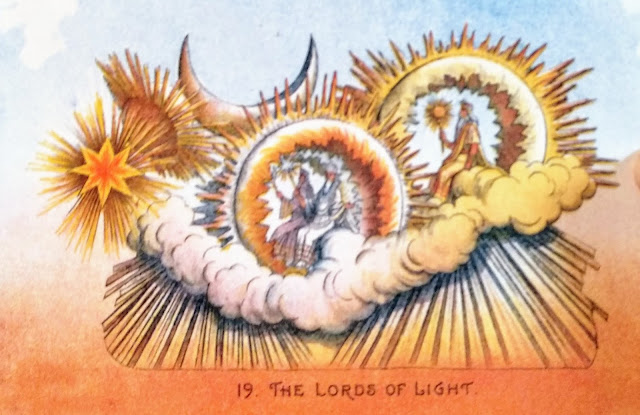 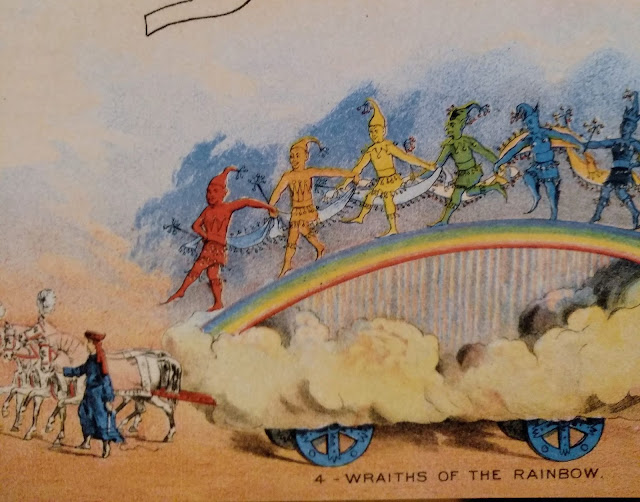 Nightfall by David Goodis
My rating: 5 of 5 stars
I do believe that David Goodis is fast becoming my favorite Noir writer. I liked this story even better than Dark Passage.

Summary: a man Vanning, finds himself in the wrong place at the wrong time. I won't say what happened because it would ruin the sequence of events in the way Goodis imparts information to the reader which is so effective.

All we know at first is that Vanning is living in Greenwich Village in New York City and his apartment is being watched by a detective.

Why? Is it because he's a murderer? A bankrobber? Or are they shadowing the wrong man? Or the right man for the wrong reasons?

What I love about Goodis' writing and especially about this story is that it centers on one person, a man out of luck who spends most of the story trying to run away from everyone else. He has to use his wits, his physical strength and courage to get himself out of some tight situations.

Of course there's the beautiful woman who mesmerizes him. But is she on his side or out to get him, too? We don't know until the very end.

One last thing I really enjoyed was the exceptionally witty dialogue. I particularly enjoyed the conversations between Vanning and the detective.

In conclusion: A great book and all Noir fans need to read it.


And a few more cards to send you off!  Have a great week fellow bloggers/revelers! 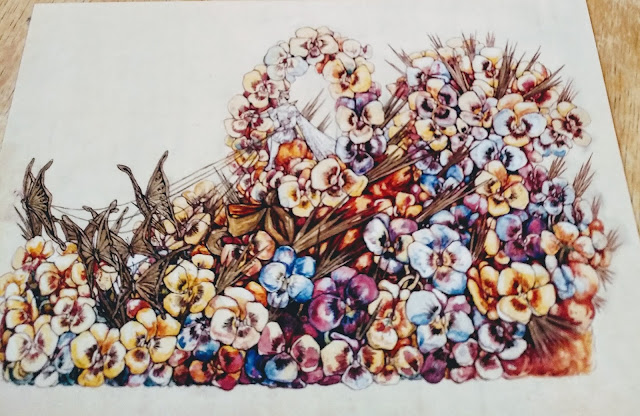 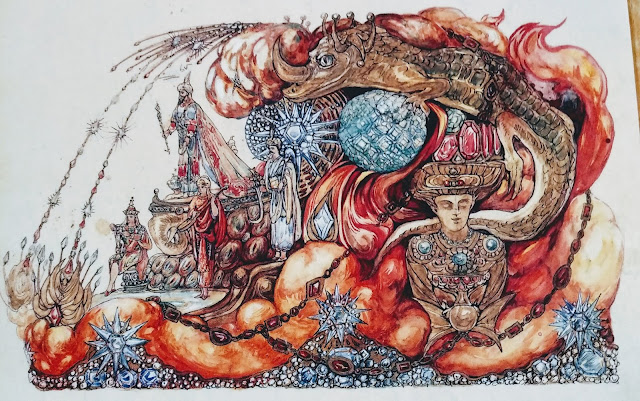 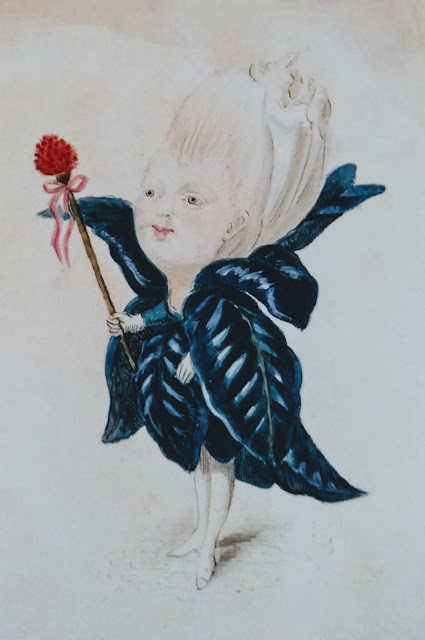