This is the second book review in a continuing series about end time prophecy.  For the first review go here. 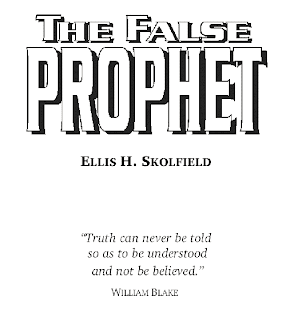 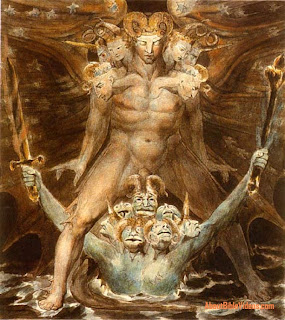 Ellis H. Skofield has written a book about the end times that differs from any book or position I’ve read before. He exhaustively explores the prophesies written in the book of Daniel in the Old Testament, connects them to the prophecies in New Testament scripture, primarily Revelation but also Jesus’ Olivet Discourse in Matthew and passages in Paul’s epistles.

Skofield uses certain time frames to discern who the Beast, the anti-Christ, the false prophet, and the Abomination of Desolation is. His logic and arithmetic are thought-provoking as well as staggering.
Much of what he has to say is too complicated and detailed to try to reproduce here but I will try to give some of the more startling calculations. By equating Daniel’s days with years Skofield arrives at the precise years that:

Who the leopard-bear-lion rulers are
and
Who the Two-horned beast is to name just a few.

I find it interesting to see that Skofield asserts that the two witnesses described in Revelation are the Jews and then the Christian church. I can see where this makes sense in that for the first millennia, in a world steeped in paganism that had lost sight of their creator, the Jews were the ONLY group of people who knew the one, true God. They were the only people that held the gateway to the truth.

Then the Messiah came and His followers have been witnessing to God’s truth ever since and His gospel is spreading all over the world. So in one sense I can see how Jews and Christians can be seen as the two witnesses giving testimony to the one true God of mankind. I’m not saying I’m convinced, I’m just saying that on one level, what Skofield is saying is true. Whether these are the two witnesses being referred to in Revelation, I don’t know.

I should mention the Skofield is a Jewish Christian. That means to Jews he’s an apostate but to Christians a complete Jew who has progressed beyond “types and shadows”- which were the function of Jewish traditions and rituals- to what they were leading up to, namely the ultimate redeeming sacrifice of the Perfect Lamb of God that truly redeems us as a sacrificed animal never can or could.

Skofield asserts that the Jewish people are being purposely separated by God so they won’t assimilate. This is because He has an ultimate, wonderful plan for them in the final days of the world. It’s pretty exciting and joyful to think about.

Reading The False Prophet made me realize that everything that has been happening in world history has not been a random turn of events but rather leading up to a point: the Roman empire, rise of Islam (which, according to Skofield, figures prominently in the end times), the Roman Catholic church, Reformation, rise of Secular Humanism, Zionism and global economy and terror. Reading how Skofield matches these events with specific prophecies in the Bible causes goose bumps to rise.

The False Prophet would be considered a historicist approach to end time prophecy.  Whether one is a futurist, dispensationalist, preterist or any of the other myriad “ists” that interpret the end time prophecies a certain way, I strongly recommend reading Scofield’s book. It is heavy food for thought. 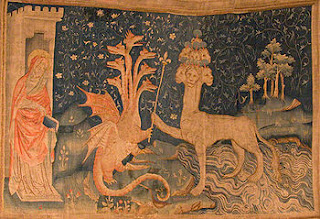 The Beast of the Sea Tapestry of the Apocalypse
c. 1000 A.D.

A free download of this book can be found here

Wow, sounds like a heavy book. I've heard before about the theory that Jews are being separated on purpose just so we can all die when the world ends, or something like that (not as macabre I'm sure, but that's the gist).

Not to die but to live eternally. According to Old and New Testament prophecy, God promises to restore the earth and to reconcile man to Himself through the Messiah. Christians believe Jesus Christ is the Messiah. According to Skofield, when Messiah returns the Jews will finally be reconciled through Him. Of course, many Jews, such as Skofield himself, already view Christ as the Messiah and wait for His return.

I read The False Prophet back in 2005. I think Ellis Skolfield's interpretations are nothing short of Spirit inspired. Amazing book. Highly relevant to our day and time.

Endtime: It certainly gave me a lot to think about.

Just read The False Prophet. Best book I've ever read, it blew my mind. It was just what I have been looking for. I read it on his website for free but am buying several copies to pass out I loved it that much.

Tammy: I'm glad you liked it as much as I did. Glad you're getting copies for people.

Hello this is Armando.I read this book over 27 years ago when it was The Hidden Beast.It made perfect sense then and everyone thought I was crazy for believing it.Man has been teaching false Doctrines since Lacunza and those teachings are in all Christian Schools.Just like the silly notion that Adam and Eve were created on the same day(6th).Adam was without sin and he got lonely after a couple of hours after he was created,Really???God gave him a job to do,what was it?Start seeing scripture from God's perspective not man's and He will reveal the truth.The Muslim problem here is about to get worse.

End times prophecy is a topic gaining momentum due to the events of our world. We have a Bible study on the Mark of the Beast which covers some of the things mention here.

Brandon
World Events and the Bible

Thanks, Brandon. I've checked out your site. Very nice. I am going to read your study on the Mark of the Beast.

Hello Sharon,
Thank you for linking to Tribulation.Com. God bless.

Dear Anonymous. You are welcome!

Skoffield's works are great. Read "islam in the end times". Hungry for more of Ellis' books. But cannot afford to buy them. wish i can have some very generous persons send me soft copies of his books to my email (chikezeh2020@gmail.com). His books are scarcely found around my country Nigeria. Thanks to the Holy Spirit who works mightily through Skolffield. Praise God!

You don't often find anyone who has actually read this book. I was pretty amazed at the accuracy of the numbers he presents, and I literally laughed out loud in places (muslims, in trying to desecrate the Holy Temple Mount made a mistake and built their "desecration" something like 500 feet from the REAL location of the temple's Holy of Holies, so it in fact has not actually been truly desecrated. God has preserved it untouched.

It's a great read, but the conclusions he draws are hard to believe given the enormity of the consequences. The lost tribe of Ephraim is really America? Or they are in America?

So, it's like I really WANT to believe it, but the consequences of it are staggering.

Hi Robert. I did not know about this book until a friend loaned it to me. I do not know how accurate his assessments are but they are certainly food for thought.

"Not to die but to live eternally" that is what i miss in Skofields writing, the good news of Gods Kingdom on earth.

Hi Hanlo. This is the only book of Skofield I read. I don't know if I agree with what he says, but I find it food for thought.