And here is the ridiculously sublime Mahler Adagietto from Symphony no. 5

A few more photos of my trip to Israel.

It was Sukkot the first week I was there.  This is the Feast of the Tabernacles.  It comes five days after Yom Kippur and families live in booths for a week commemorating the miraculous protection God provided the Israelites after their exodus from Egypt.  These tents or booths were everywhere. 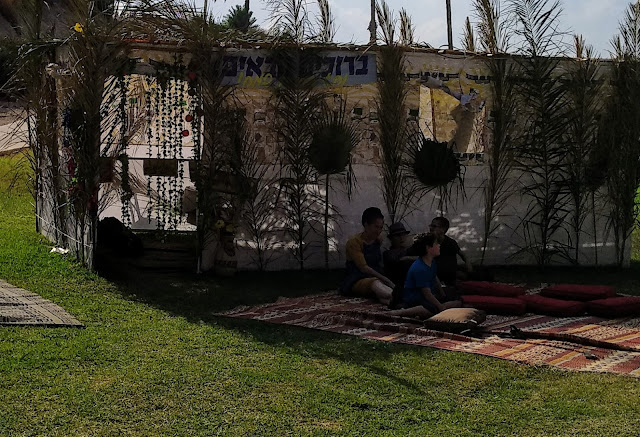 Our first day we stayed in Tel Aviv and traveled to the ancient site of Caesarea on the Mediterranean where Herod the Great made a palace, an amphitheater, and a hippodrome.  Below is a remnant of the palace Herod made.  It is the forum where St. Paul presented his case before Felix the Procurator (Acts 25). 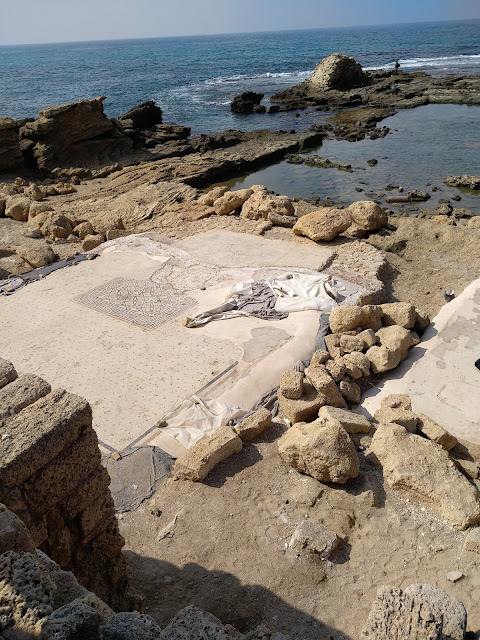 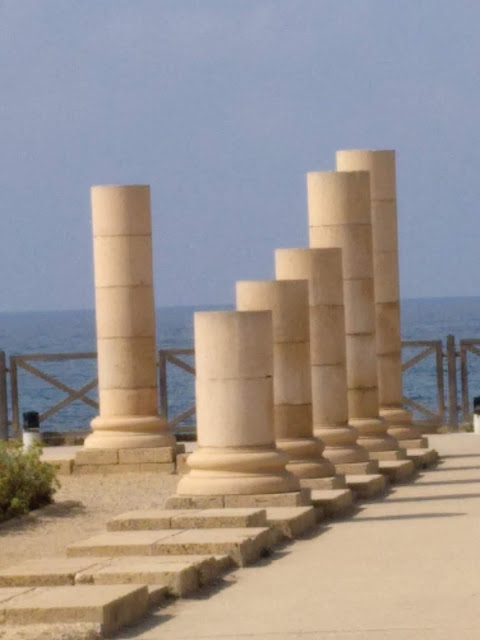 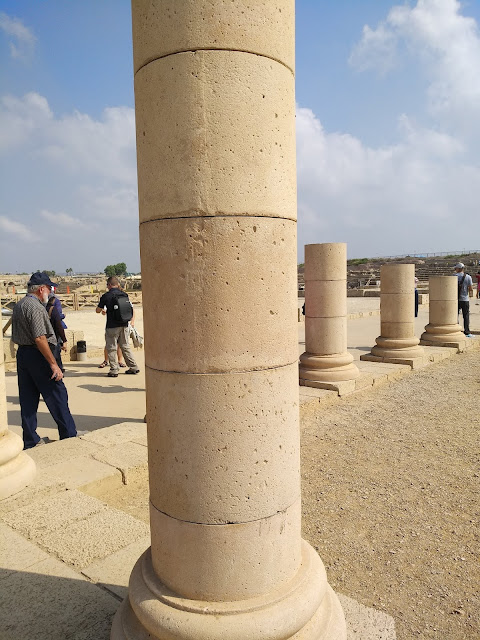 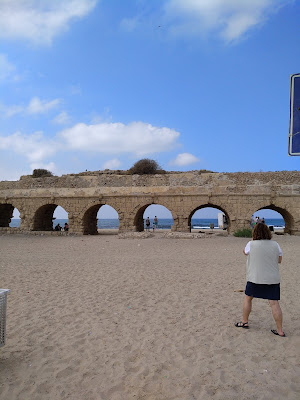 Below is the view on top of Mount Carmel where Elijah challenged the 400 Baal priests. (1 Kings 18)
The valley below is Meggido.  In the book of Revelation, it is prophesied as the pen-ultimate battle in the end times, called "Armageddon."

It is interesting to note that Bill Maher visited this area in his mockumentary "Religulous" where he explained how stupid Christians were for believing that such a peaceful, beautiful valley could possibly be the site of a war.

Our guide explained to us that beneath the ground below are buried fighter jets aimed at Jordan and Syria.  In the mountains the Jordanians and Syrians have hidden missiles aimed at Israel. 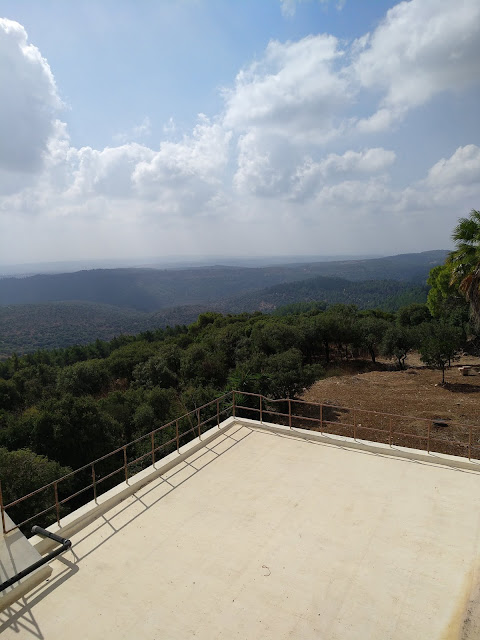 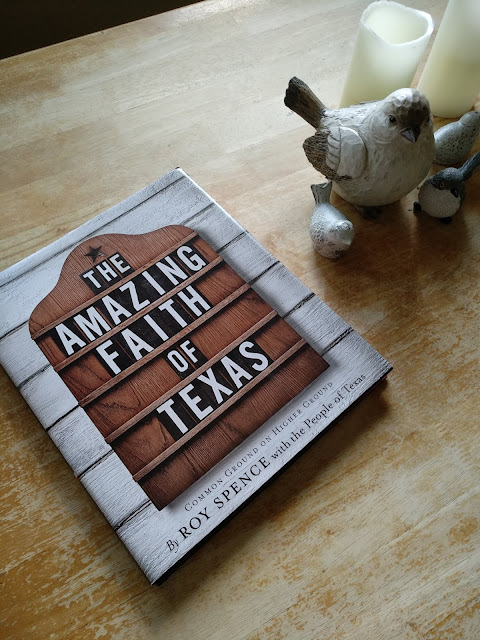 The Amazing Faith of Texas: Common Ground on Higher Ground by Roy Spence
My rating: 3 of 5 stars
I will start off by saying that the photographs are superb. I love architecture and especially architecture of places of worship. Worship is an integral part of a majority of the world's population in some form or other and I think it strange how little attention is paid to it in the public venue. This book is filled with all sorts of worship buildings, mostly Christian, it is, after all Texas: country churches, large city groups...traditional, historical, modern...all of them lovely in their own right.

The book also has testimonies of individuals of different faiths and what their faith means to them. And this is where I complain.

On the one hand, the testimonies are from Christians, with a number of Buddhist, Muslim, Hindu, and various other beliefs I would catalog as vaguely "spiritual".

But it would be more accurate to write all the above mentioned religions with quotations marks, because every last one of them failed to define what made their beliefs unique.

I believe the author carefully selected his interviewees so as to have them say more or less the same thing, i.e. "Their faith helps them be a good person and contributes to peace on earth."

It's strange to me how most of them talk about their faith in God or Jesus Christ  primarily as an impersonal force to help them. The central focus is not God and His glory, but mankind's improvement. Every statement was some kind of general "I'm a better person because of my faith", which, on the surface sounds nice, if not a bit treacly, while avoiding the more substantial points of human nature.

I looked up the residences of the people interviewed and it appears the author carefully selected who he interviewed as well. Most of them are from the Austin area, which, if you know Austin as I know Austin, says so much. It's a huge drug, hippy culture that loves to pontificate on happy notions of world peace and "inclusion" and "acceptance", when what they really mean is let's feel good about ourselves and get high.

And that sums this book up. If you want to close your eyes and tell yourself "all roads lead to the same goal" while ignoring the fundamental differences of each faith, which is another way of demeaning people's personal beliefs, you'll love the oozy nebulous testimonies in this book 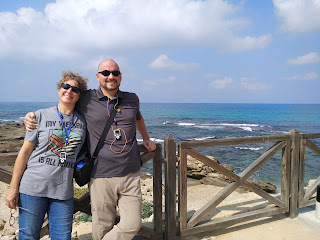 
As you know I spent the last half of October in Israel.  The first stop was New York.  The second stop was Ukraine.  The following photos are of Turkey and Cyprus from the sky as we flew over.  You may or may not know that I was born in Turkey, but left when I was only a year old. I always wanted to return so it was exciting to finally see it in person. 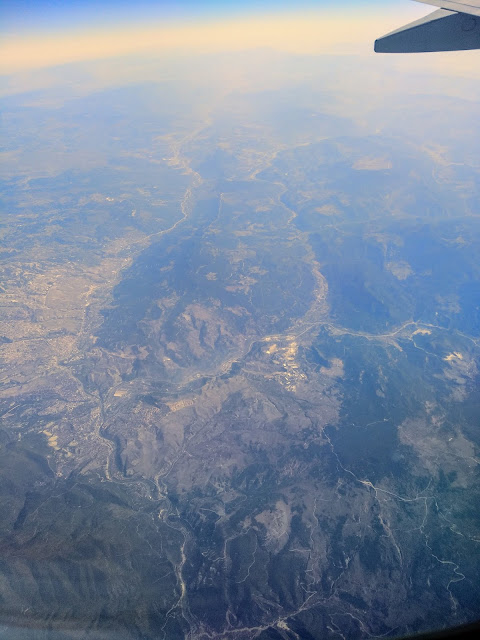 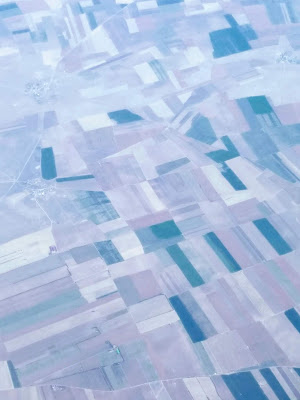 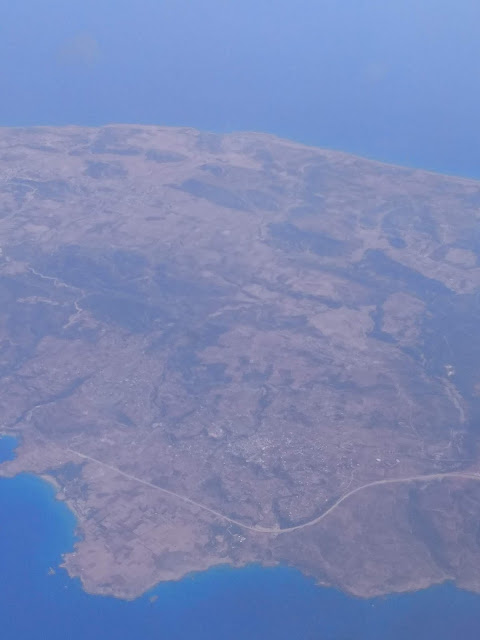 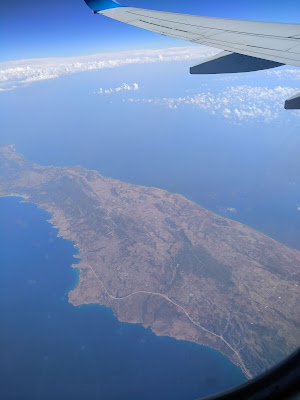 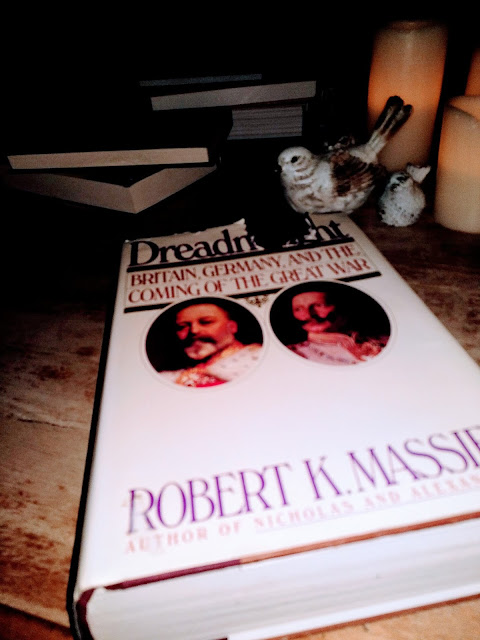 Dreadnought: Britain, Germany and the Coming of the Great War by Robert K. Massie
My rating: 5 of 5 stars
This is a superb history of the events and characters surrounding the years leading up to WWI.

Massie starts with Queen Victoria, her childhood, her reign as Queen and her offspring. For a long time I did not realize how the major leaders in Europe were all related to each other, having Queen Victoria for a grandmother.

Massie does an excellent job of describing the English culture vs the German culture and how fiercely nationalistic both countries were, although Germany seems to have taken their identity to extreme heights, which helps explain the Kaiser's ambitions to conquer and colonialize third world nations.

Different chapters are devoted to leaders, Prime Ministers, Naval Ambassadors, Counselors etc... we learn of the famous Bismark, and also some good insight into Winston Churchill's upbringing and his, uh, shall we say, free-wheeling parents and also his neglected childhood, which can be heart-rending to read.

We read about the Boer War and ultimately the events that led to WWI. I had always wondered why the assassination of Archduke Ferdinand caused a world war, but then one sees the machinations behind...Austria wanting to reduce Slovenia back to a vassalage. Slovenia's refusal to return to serfdom, Russia coming to their aid, France coming to Russia's aid, England coming to France's aid and, finally the U.S. coming to everyone's aid.

Why? Because Kaiser Wihelm was determined to become Emperor of Europe and was going to back Austria invading Slovenia as a means to accomplish this.

A long, but informative and enjoyable read. 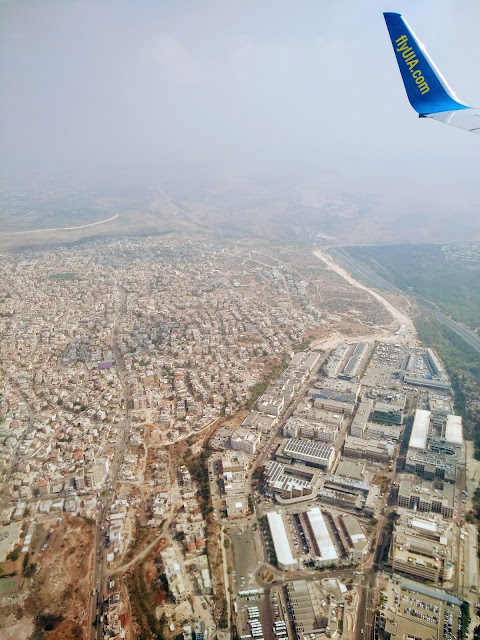 Listening to Rachmaninoff's Piano Concerto no. 3 or the "Rock 3" as they referred to it in the movie, "Shine" starring Geoffrey Rush.  This one is performed by Vladimir Horowitz, a personal favorite and the greatest pianist of the 20th century. 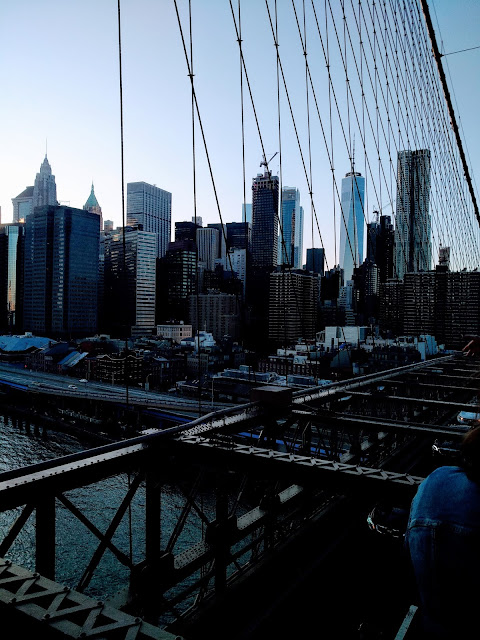 As many of you know I have just got back from Israel.  I took a ton of photos so I will impose them on you a little at a time.  Our first stop was New York city where we stayed over night.  Unfortunately it was Columbus Day so all my favorite art museums were closed.

So we crossed the Brooklyn Bridge.  I naively thought it would just be a romantic stroll, just me and my hubby.  No, there were thousands and thousands of people with us. We were practically the only ones crossing into Manhattan.  Most were coming from Manhattan into Brooklyn.  So we were an hour pushing our way through the crowds like Salmon swimming upstream, and often getting pushed into the bicycle lane, which took up half the walkway. 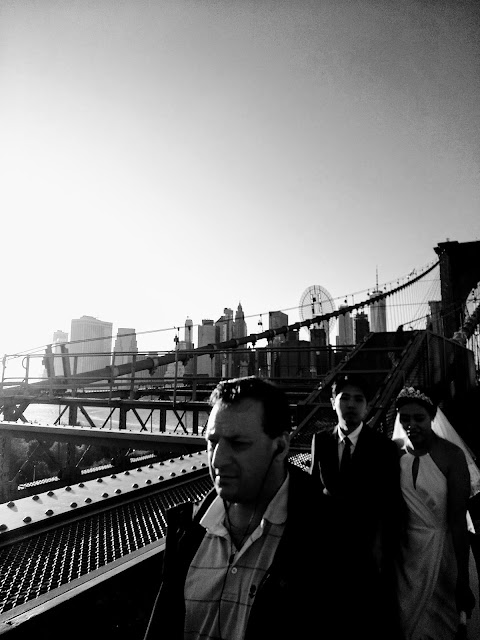 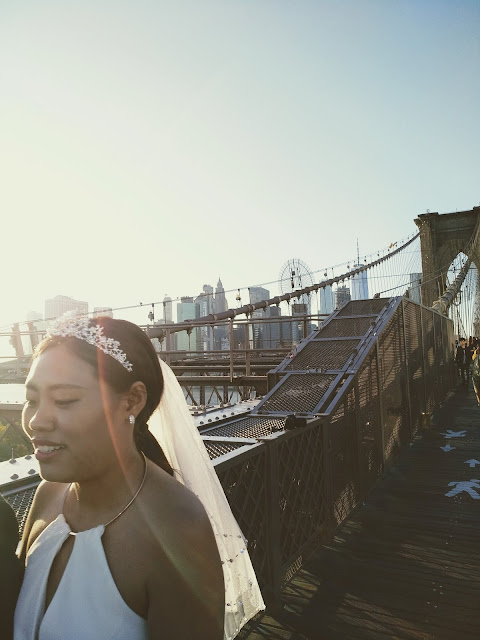 One aggressive cyclist growled at me to move over.  After jumping up like a startled Armadillo getting shot at, I spent a good amount of time on the bridge thinking of all the things I could have said or did to that jerk:  stuck a stick in his wheels, screamed back...instead I had to let it go.  "Let it go, let it go..." 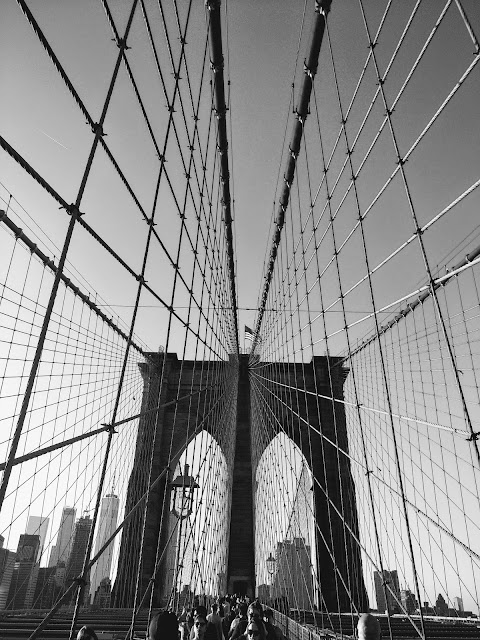 On the Manhattan side we went to see some of my favorite buildings.  The first one is the Flat Iron Building.  I have a large photo book of it's history through the eyes of famous photographers. 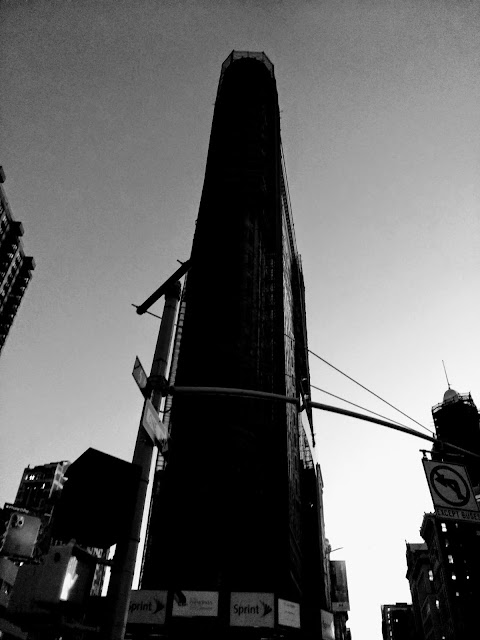 Of course the Empire State Building 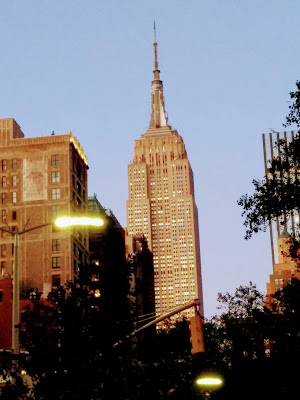 And also the Chelsea Hotel. 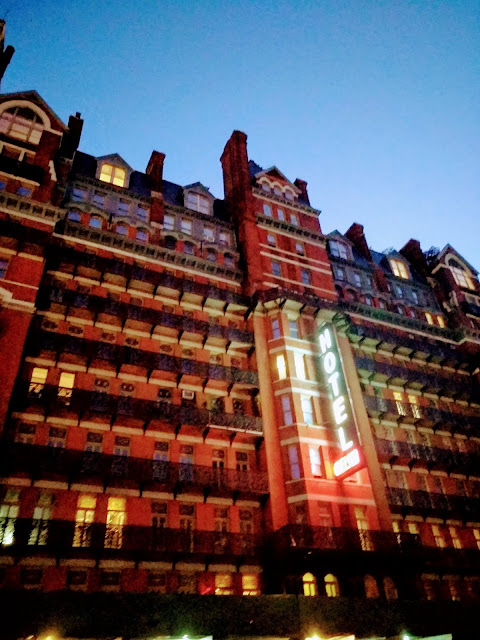 We finished the day off at a Thai Restaurant Josh had learned about on one of the many foodie videos he watches on Youtube: Kum Gang San. 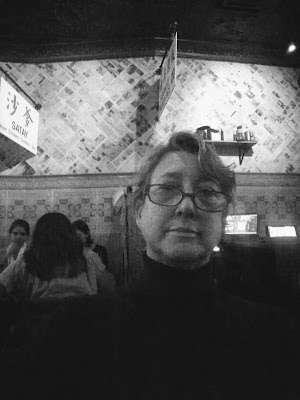 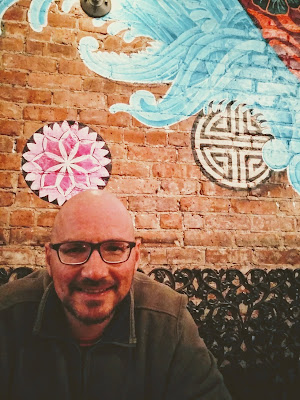 And here's my hubby as we wait for the train back to Brooklyn.  We leave the next morning for the Ukraine and then Israel.  He is holding my purse as I do something I can't remember what.  As you can see he is secure in his manhood.  He said he is going to carry a "murse" (man purse) when we get to Israel. 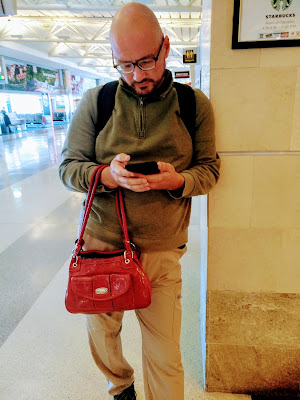 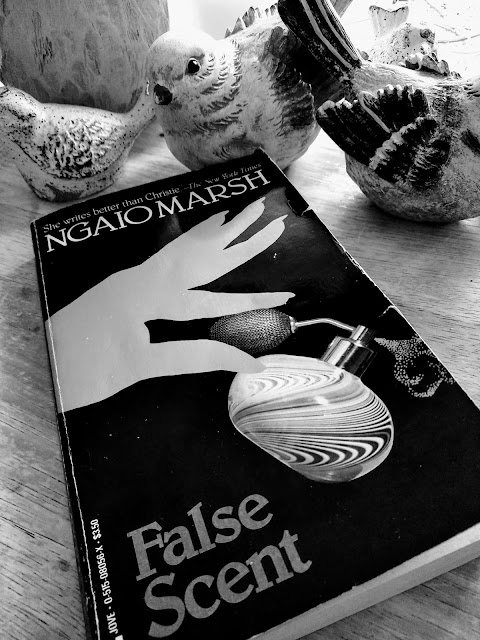 False Scent by Ngaio Marsh
My rating: 5 of 5 stars
This is the first novel I have read of Ngaio Marsh. I hesitated for a while because I had read a short story by her and was not all that impressed. This novel, however, has changed my mind dramatically.

An aging actress is having a birthday party. We meet her and the various people that play roles in her life. I will not say more than that because there are several elements of surprise. You'll have to read the book to find out who is murdered, why anyone would want to murder this person (hint: there are ample reasons, or rather one profound reason many people would be motivated to do away with this individual) and all the clues and details that add up to a well-planned and subtle executing of a crime that no one, including the reader, regrets.

I thought Marsh's writing style was outstanding. Her characters all have strong voices and convincing personalities. I relished her dialogue and narration. The mystery was fine as mysteries go and Marsh certainly deserves her place in the Golden Era of Detective Author's Hall of Fame, but it was that beautiful writing, the descriptions that packed force, but never overly described that sell this book.

Her method of allowing us to see everyone's emotions and thoughts and motives was eloquent as well as effective in moving the storyline forward.

I hope to read many more of Marsh's books.

Expect more Ngaio Marsh reviews.  My husband, who loves me, won a bid on eBay acquiring all but three of her books for 25 bucks. 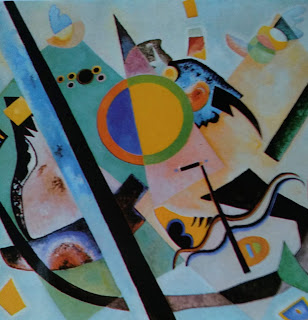 A postcard I sent.  A work by Joan Miro.