The Book of Daniel by Clarence Larkin 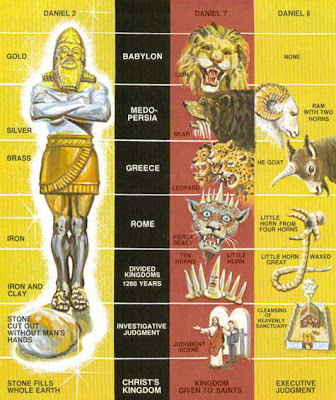 Clarence Larkin (1850-1924) is best known for his copious dispensational diagrams and charts on a host of theological subjects. His The Greatest Book on Dispensational Truth in the World sits on bookshelves far and wide. Much truth is contained therein. In the quote below, the "some books that fell into his hands" were books written by the original Plymouth Brethren.  (From the With Christ web site)


This is part of the series of books I’ve been reviewing about end times.  In addition to Revelation, the book of Daniel is one of the most important books of the Bible that prophecy about world events.  Many of the prophecies have already come to pass as history has verified.  Today Christians examine this book to make sense of what is happening in our world today and where it is leading.


Rev. Larkin takes the reader through each chapter in the book of Daniel and their meaning as it pertains to Daniel's time as well as its relevance to us. His book is divided into ten chapters.  Chapter one describes the beginning of Gentile dominion.  This started when was taken away into captivity into .  Daniel was one of the young men that was taken away.  He and his friends, Shadrach, Meshach, and Abednego so impressed the Babylonian king, Nebuchadnezzar, that they become high officials and advisors to him.

Chapter 2 records Nebuchadnezzar’s dream and Daniel’s interpretation. For those not familiar with the book of Daniel, King Nebuchadnezzar dreamed of a giant image.  This image was of a man.  The man’s head was made of gold, his breast and arms of silver, his belly and thighs of brass, his legs of iron and his feet were part iron and clay. A stone hits the image and it breaks up into pieces.

Daniel informs Nebuchadnezzar that this image represented the different powers that were going to succeed each other.   (For those not familiar with the scripture, go here.) Rev. Larkin breaks down each part of the body


Much of the dream has already transpired as historical events show.  Here is the breakdown:

1.  The Head of the Image:  The Babylonian Empire 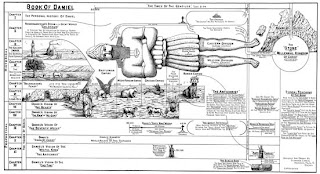 2.   The Arms and Breast:  The Medo-Persian empire.

6.  The Stone:  The Millennial Kingdom of Christ  (And in the days of these kings shall the God of Heaven set up a Kingdom, which shall never be destroyed:  and the Kingdom shall not be left to other people, but it shall break in pieces and consume all these kingdoms, and it shall stand Forever.  (Daniel 2:44)

Chapter 3 is about the golden image that Nebuchadnezzar erected for everyone to worship.  Daniel’s friends, Shadrach, Meshach, and Abednego refuse and are thrown into the fire.  Their response to the king is one of my favorite passages of scripture:

Shadrach, Meshach and Abednego replied to the king, "O Nebuchadnezzar, we do not need to defend ourselves before you in this matter. If it be so, Our God whom we serve is able to deliver us from the burning fiery furnace, and He will deliver us out of your hand, O King, but even if He does not, be it known unto you, O King, that we will not serve your gods, nor worship the golden image which you have set up." (Daniel 3;18)

And, as we know, God does deliver them and Daniel records:

Then King Nebuchadnezzar leaped to his feet in amazement and asked his advisers "Weren't there three men that we tied up and threw into the fire?" They replied, "Certainly, O king."


He answered and said, "Lo, I see four men loose, walking in the midst of the fire, and they have no hurt; and the form of the fourth is like a son of the gods."  Daniel 3:25

The 4, 5, and 6th chapters form the rest of the historical part of Daniel and include the Tree Dream, the Fall of and the Lion’s Den.  The final chapters analyze Daniel’s visions and how they pertain to the future and our modern day.  He explains the meaning of the Four Wild Beasts, the Ram and the He Goat, the Seventy Weeks and the Scripture of Truth.

He also includes charts with time lines.  It’s important to note that Rev. Larkin takes a dispensationalist point of view when evaluating these scriptures.  So he interprets the Great Tribulation as a time that is still coming to the earth.  He also believes in a thousand year reign of peace following the return of Jesus Christ.

He writes about the regathering of Jews to the nation of . He calls this a “National Resurrection”.   He quotes Jeremiah 16:14-15 and Ezekial 37:11,12.  and explains that  the “dry bones” coming back to life are becoming a nation again.  What’s exciting about this is that Larkin wrote his book in 1919.  It hadn’t even happened at the time of his writing.  Little did he know it was just around the corner!

I found this book to be eloquently written and scripture lucidly explained.  If you weren’t excited about Christ’s coming before, you should be after Rev. Larkin explains the book of Daniel to you.

The Second Coming by John Macarthur

The False Prophet by Ellis Skolfield

The Harbinger by Johnathon Cahn

The Apocalypse Code by Hank Hanegraaff

Posted by Sharon Wilfong at 4:51 PM

Very interesting Sharon. I read the book of Daniel a long time ago (and even visited Meggido 4 years ago) but I don't remember it being this intricate.

Thanks, Zohar. I find studies of this kind absolutely fascinating. I plan on reading Larkin's other books as well.