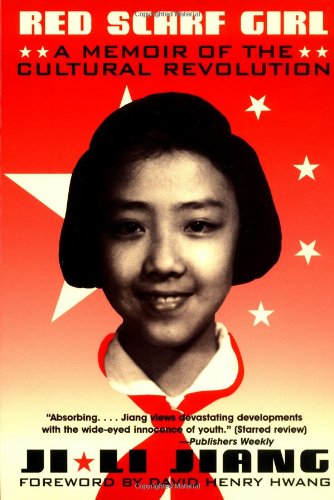 
Red Scarf Girl is a disturbing account of one girl and her family's experiences during the Cultural Revolution of China during the sixties. It's amazing how we look at our world. I remember watching documentaries of the hippies, anti-war demonstrations, psychedelic drugs and “free love” that seemed to personify American and European culture during the 1960's. It's strange to think that at the same time on the other side of the world, another group of people were experiencing a very different reality and culture.


This book is the real-life account of Ji Li Jiang. Ji Li was a smart, motivated, academic achiever who totally embraced the cultural revolution. . She proudly wore her red scarf and carried around her little red book of Mao Ze-Dong's sayings to show her support of the revolution. Like others her age, she believed that China was in a new age.  Anything old or traditional had to be erased or destroyed. This meant that many families had to be deposed of.  “Black family” was the name given to any family that belonged to the old order of things:  landowners, anyone with money or had servants. In order to rid the “New China” of these backward old ways, these wealthy, educated families were turned out of their homes and sent to “re education” camps or labor farms. The people or mobs that turned them out then looted their houses. These mobs were primarily comprised of young people who worshiped Mao Ze-Dong. They believed that they were serving China by ridding her of these “bad” remnants of the past.

Many of the people who were persecuted for their “evil oldways influences” were elderly but no mercy was shown them. People who were once respected members of society were humiliated and forced to do demeaning tasks, such as collecting garbage or sweeping streets. What is especially shocking is the lack of any sympathy the young people felt towards these older people, even their own parents. One boy smirked as his father was forced to ride through the city streets on top of a wagon wearing a dunce hat and his arms tied up above his head.

Even Ji Li was shocked at this but the boy insisted he was glad it happened because his father was part of the “four-olds” (old ideas, old culture, old customs and old habits).  As things worsened and more and more of Ji Li's friends and relatives fell victim to persecution, Ji Li grew increasingly concerned with the hardened attitudes of people all in the name of Mao Ze-Dong and a new and better China.

She speaks of a wealthy neighbor who was thrown out of her house, all her possessions taken from her and forced to sweep the streets in front of her old mansion.

She kept her eyes on her work and moved the big broom back and forth laboriously....Somehow she tripped over the broom and fell.


It looked like a serious fall. She moved her hand and struggled to get up, but she couldn't seem to stand. I was about to go to help her when I saw her youngest son, my cousin Shan-shan, walking toward us. Shan-shan would help her, and I didn't want to embarrass her by making her realize that I had seen her sweeping the alley......


After a few steps I turned around to see if they were all right. I could hardly believe my eyes. Shan-shan had walked right past his mother! She was lying there, injured, and he had not stopped to help her.... He must not have wanted to expose himself to criticism by helping someone from a black category....


I took a step toward Aunt Xi-wen and stopped.  Maybe I shouldn't help her either. People would probably say something if they saw me, especially since I was from a black family too..


At school she was respected and held a leadership position but the cultural revolution had its strongest disciples in the school. Teachers were accused by students and turned out and replaced with new teachers who taught the “new ways” which meant showing no respect to teachers or adults or teaching much of anything for that matter.  Also, good grades and academic achievement no longer merited acceptance into a good school. Students who didn't achieve or make good grades had an equal chance of getting into schools that had previously been reserved for those who made high test scores.  Acceptance into schools was based on names pulled out of lotteries. This was to promote equality and to make sure no one was looked upon as a leader, therefore “better” than others who did not achieve as well.

Eventually Ji Li's family was exposed and their house looted. Her father was taken away to a reeducation school and forced to confess all his crimes. Ji Li finds out that any hope for promotion and academic opportunity in school is dependent on her telling the officials all the “crimes” committed by her parents.

She refuses to do this and is consequently ostracized.

The book ends in despair with no resolution. The epilogue informs us that years later Ji Li and her family somehow immigrated to the United States where she subsequently wrote her memoirs.

It is a bleak story but an excellent example of group think and what happens to societies that place their faith in man-made ideals rather than God-made ones.

The forward of the book explains that Mao Ze-dong started the Cultural Revolution to preserve his power which he felt was threatened by other government members. The human suffering and misery one man caused for his own gain is about the most appalling aspect of the madness that overtook the Chinese young people. Ji Li explains in her own words:

Many friends have asked me why, after all I went through, I did not hate Chairman Mao and the Cultural Revolution in those years. The answer is simple: We were all brainwashed.


….I asked An Yi's mother if she had hated Mao when she was forced to climb the factory chimney. 'I didn't hate him, ….I believed that the Cultural Revolution was necessary to prevent revisionism and capitalism from taking over China. I know that I was wronged, but mistakes happen under any system. If the country was better for the movement that persecuted me, I was still in favor of it. It was only after Mao's death that I knew I was deceived.'


This is the most frightening lesson of the Cultural Revolution: Without a sound legal system, a small group or even a single person can take control of an entire country.

This is the concern I have with ideologues in my own country. They scorn God and His laws while worshiping their utopian ideologies. I hope they never come to overpower the rest of us. Keep praying.
If you buy this book, please do so through the link above so I can receive a small percentage.  Thanks!


I'm linked up with:

Posted by Sharon Wilfong at 7:57 AM

I'm glad you wrote this. I see the same pattern falling into place in our country. Brainwashing is the only explanation as to why half of the people in America seem to have lost their commons sense. Our media has done a great job of brainwashing those who are susceptible. You are so right when you tell us to continue to pray. Dear God, forgive us for turning our backs to You, and for forgetting that You alone are the reason we have this beautiful and free nation. Help us reinstate leaders who know You, and follow You! Protect and strengthen those leaders that are already in place. We need You! In Jesus' name, amen

Hi Sharon, How wonderful that you have lived in so many countries and continents! My sister has travelled to every continent except Antartica. It's another thing to say you've LIVED in almost every continent! Great post too!
I'm a NEW FOLLOWER from the hop. If you have time, I hope you can hop by and visit me:
http://stylendecordeals.blogspot.com/

Hi Nancy: Thanks for visiting. I'm on my way to visit you!

Hi, I'm the co-host from the Middle Matters blog hop, thanks for linking up with us. I'm a new follower!
Jennifer from Just
Wedeminute

Hi Jennifer! Thanks for visiting.

this book is so addicting,i mean it just pulls u farther into interest,and its really good book,one of the best books ive ever read,im reading it in school and im already four chapters ahead of the class

Hi, Matthew! I"m glad that you like the book. It had such an important message. It's pretty unbelievable how a whole population went down a wrong path.

I picked up this book at a library sale recently. I've read a few books set in Mao's time (Wild Swans was one that was excellent) and they have all been very harrowing.

HI Carol. I will look up Wild Swans. I think these books are so important for people to read and be cognizant of the sort of societies that people have suffered through. They also serve as a cautionary tale for the rest of us.