I hope you enjoy listening to Russian Guitar. 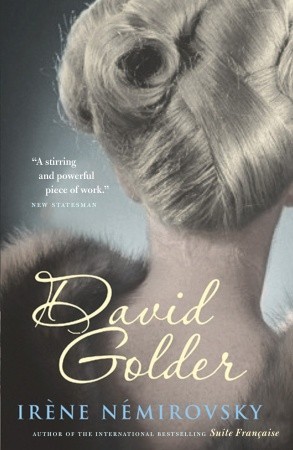 This is a profound novel. It details the lives of poverty stricken Jewish people escaping Eastern Europe and becoming adept at business and then extremely wealthy in Western Europe.

But does it make them happy? It seems to me that in order to avoid hearing the empty rattling in their own souls they fill themselves up with material goods, intrigues, cruises, travel, mistresses and toy boys.

It is very sad to witness a family in which each member so thoroughly hates the other. The protagonist, David Golder, is a brilliant businessman and has given his wife and daughter everything they want, but the stress and pressure is beating him down. He receives no sympathy from wife or daughter, who view him solely as a source to provide their gratifications.

Even when he has a heart attack, no one cares. But then, neither does he. A friend and business associate is failing financially for the same reason Golder is sinking: the extravagant lifestyle of their family. Golder refuses to help him and the man commits suicide.

I am astounded at just how extravagant Golder's family is. Money means absolutely nothing to them, except to buy obscenely expensive cars and jewelry. Their only concern is when it runs out.

If Golder dies, his wife and daughter are worried about the money supply drying up. But then again, if they can get their hands on his money, then it would be better if he died, or so they think.

The callousness of these people is shocking, but convincingly written. This is the first book I've read by Nemirovsky and I enjoyed her fluid, yet pungent style. She exposes her characters so their leathery hearts are absolutely naked.

This book was written in the 1920s before a decade that was going to see the destruction of many wealthy Jews (not to mention poor ones as well) but I wonder how shocking that must be for anyone to live in such glamour and luxury to suddenly find themselves stripped of everything, money, power, human dignity and even life itself.
Posted by Sharon Wilfong at 6:27 PM 5 comments:

Walt Disney: The Triumph of the American Imagination by Neal Gabler

Here is some "Peaceful Lute Music."

Here is a painting of Fred.  Fred is my friend's rooster.  He is such a sweetheart and so protective of his "girls".  I've painted several Acrylics of big, beautiful Fred. 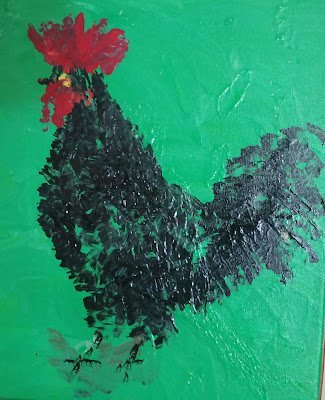 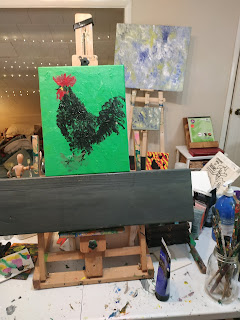 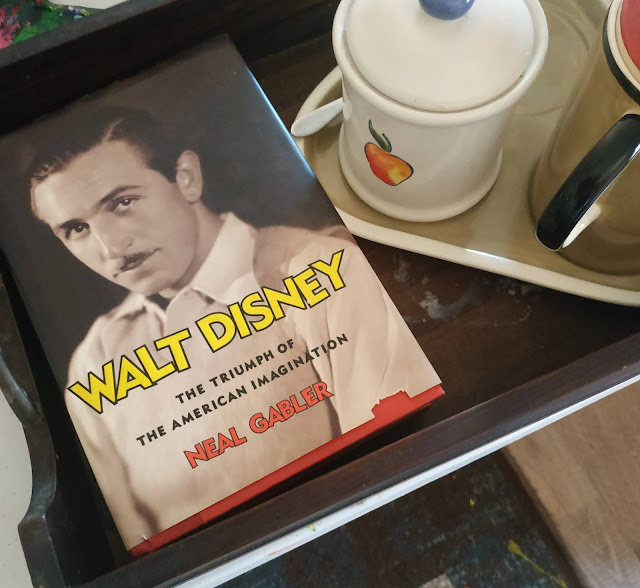 I don't know if this is the best biography out there of Walt Disney, but it certainly seemed thorough, balanced and respectful of its subject.

Gabler starts with Disney's humble upbringing in the Midwest, and describes how his fierce determination and genius to succeed as an animator drove him ultimately to Hollywood where he became legendary.

The most fascinating parts were Gabler's account of how Disney radically altered animation. He was the first to provide color, more cells of drawing per second and also was the first to create animation shorts with sound. He pioneered all of this when they were barely concepts in regular movies, much less cartoons.

Gabler describes Disney's tyrannical and perfectionist nature that forced him to do anything and everything to make his vision a reality. As an animator, this involved scouting out the best talent, even creating an animation school to provide continual training for the animators he hired.

This part, the process of creating such phenomenal movies as Snow White is extremely interesting and I would advise all aspiring movie makers and animators to read this. Not only because it provides the history of animation, of course it's all on computer now, but the techniques used to create convincing movement and character.

Disney would have the cartoonists go out and watch deer and other animals. They would dance about in the studio and base facial expressions on each other. Disney was all about realism in the beginning.

This gradually changed, largely because the audience changed and also the financial requirements were prohibitive. That is the second most invaluable part of this book for aspiring movie makers: just what everything costs. I couldn't believe how just creating a Disney short could be so expensive.

Walt's brother Roy was the business side of it. It was his job to beg, borrow and in every way above the law acquire the money to support Disney's dream.

Later Walt's dreams expanded into live action TV and movies and finally culminated into Disneyland. The process by which these were accomplished was also enlightening.

My only grievance against the book was the author's denigrating of most of Disney's movies. According to Gable, the only good movie Disney made was Snow White. Every other animated movie was a failure. I think he bases this largely because the other movies barely recovered the costs to make them.

Maybe I'm looking through the rose glasses of childhood memories, but I LOVED the Disney movies. Bambi was one of my all time favorites and so was Pinocchio.

The other grievance, if I can call it that, is Gabler's habit of presuming Disney's motives, which I think no one but Disney can really know. Also to make sweeping generalizations about the American populace and what everyone was feeling or thinking during particular world events (World Wars, Depression, etc.) is rather presumptuous. Who knows why people liked certain types of movies at one time and didn't at another. I think most people don't think much about it and just go with the flow. A scary thought, to be sure, when one considers what kind of power that gives Hollywood and I think there is plenty of evidence in our culture that they have wielded that power.

Those complaints aside, this is an excellent biography and one for those who would like to put an actual person behind the famous name.
Here's the real Fred.  Isn't he handsome? 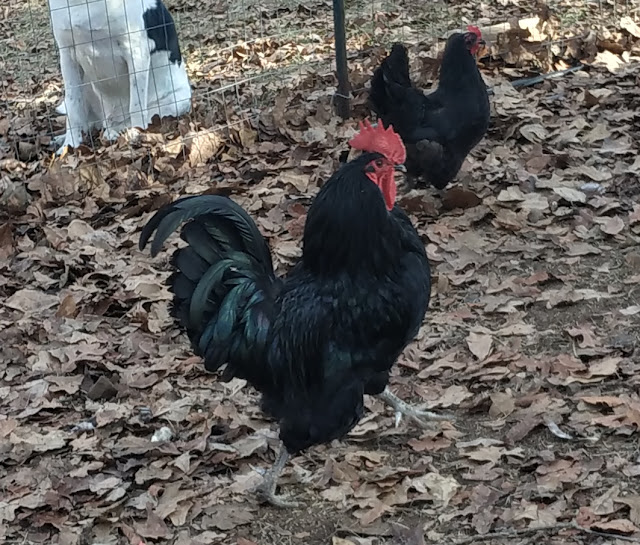 Here are some cards I've been working on for spring. 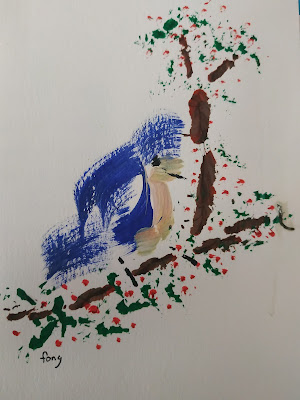 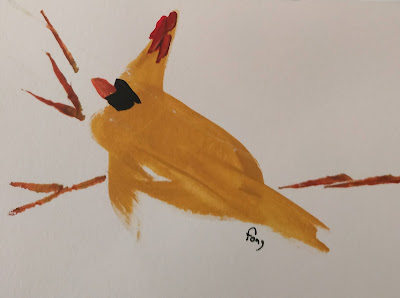 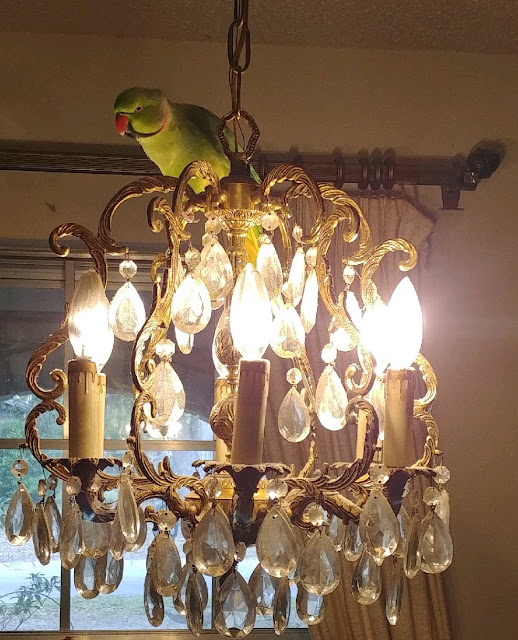 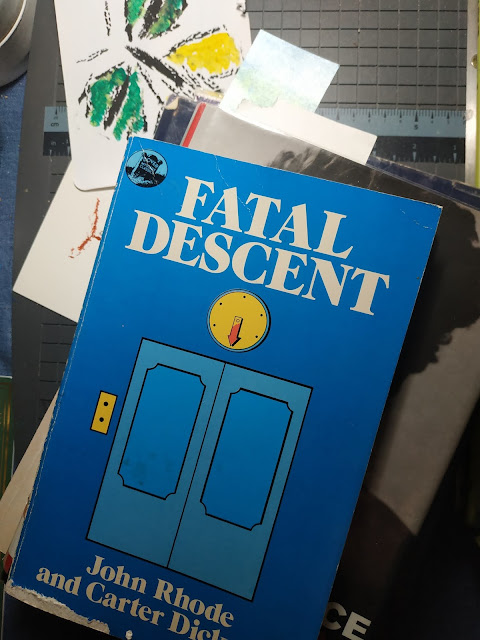 This was a blistering good mystery. I had no idea what to expect and there were surprises at every turn. Not even close to predicting the ending even when the authors seemed to be leading up to a certain culprit...bam...surprise!

Lots of shady and lovable characters. Nobody's who you think they are.

The whole story takes place in a publishing house. I won't tell you who is murdered or even how. Needless to say someone is and in a seemingly impossible way. Another "locked room" mystery, except it's not in a locked room. But I won't tell you where. I don't want to spoil anything for all you who would want to read this and I would think every crime mystery fan would want to.

One thing I'll reveal: A Doctor who specializes in psychology and a Homicide Detective work together to solve the problem. I especially liked how everyone was treated with respect and there were no straw man (usually buffoonish policemen, which I hate). It made a nice story with characters I could sympathize with and respect.

OK, the one female character was annoying, but it furthered the plot, so, whatever.
Meanwhile Josh is worried that Furry Little Maurice might be the guilty party who buried tiny little pellets under the blanket next to his head. 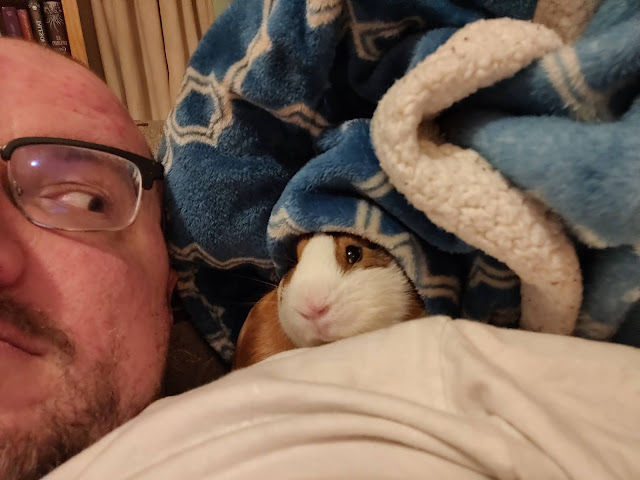 I won't publish tomorrow because today I want to wish all my blogging friends a very blessed weekend and Happy Easter.  I love you all!!
Here's a young hot shot playing Grieg Piano concerto in A minor, Op.16.
I realized that this is a post from a year and three months ago when I spent the new 2020 year with my mom and dad.  As I've already posted, my mother passed away January 14, 2021.  I was going to change the caption, but decided it's a nice memory:

I've been staying with my parents in Florida this week, bringing in the New Year with them.  I've told you all that my mother has stage four lung cancer, but she is doing very well.  She's back home and, while her energy is gone, we're able to drive to the area beaches and enjoy the sand, sun and, in the case below, rain: 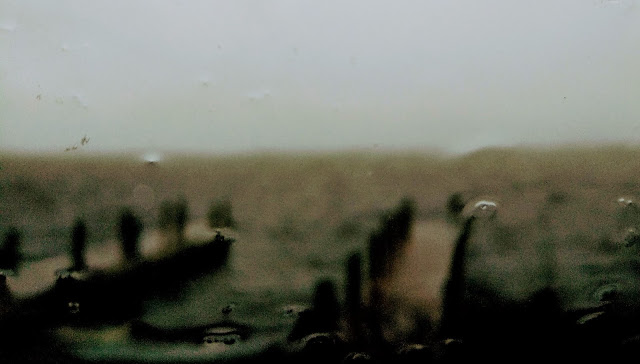 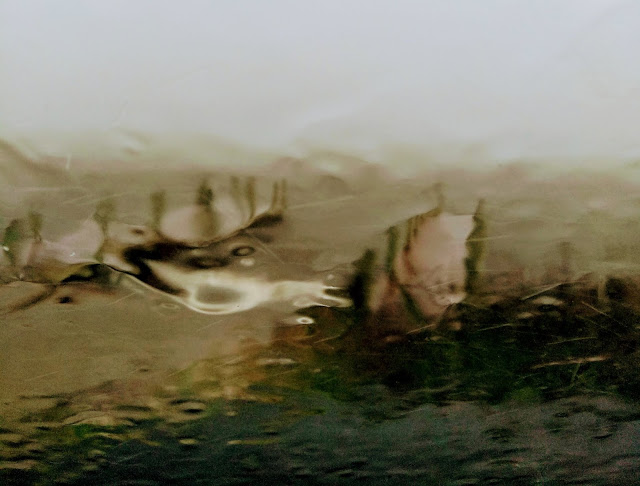 Artistic, isn't it?  It's because it was raining hard and I took the photo from inside the car.  What you see is the distortion caused by the rain on the windshield.  I like it.  Rather like an impressionistic painting.

The second day the sun came out.

Ruffian Dick: A Novel of Sir Richard Francis Burton by Joseph Kennedy
My rating: 1 of 5 stars

I gave this book a one star rating, not because it was horrible, but because it was OK. According to the Goodreads rating system that is what one star means. How one would rate "horrible" I don't know. Maybe they should have a negative graph system.
Sir Richard Francis Burton KCMG FRGS was a British explorer, geographer, translator, writer, soldier, orientalist, cartographer, ethnographer, ethnologist, spy, linguist, poet, fencer, Freemason, and diplomat.
I got the above from Wikipedia. He sounds like someone who would be fascinating to read about, doesn't he?  Maybe he is, but you won't get an inkling from this book.
First of all, I thought this was a work of non-fiction and it isn't. It is the product of the author's imagination, supposedly based on Burton's actually diaries and letters. Other reviews say that Kennedy is a reliable source. Fine. His writing is still a bore.

Also, he dwells far too much on the salacious and vulgar. Not inspiring. Maybe Burton really led that sort of life. Maybe he really wrote about every...single...sexual proclivity... he suffered from, but who cares? If I wanted to read that junk, I'd read Judith Krantz.

I got this at a warehouse for three dollars and, I know it seems cheap on my part, but I am returning it and exchanging it for a biography on Duke Ellington. I have a self-imposed budget limit and I chose this over Duke. Let's hope Ellington's biographer is more interested in giving a balanced picture of one of my favorite big band, jazz artists. I'll let you know.


View all my reviews
As I said before I want to post a few photos with my mother (and father, of course) in memory of her.  My parents on their wedding day, July 11, 1957. They got married at Carswell AFB in Fort Worth, Texas.  When they visited, we loved to drive to Fort Worth and visit their old haunts.  The house they lived in has been torn down, but the site is still there. 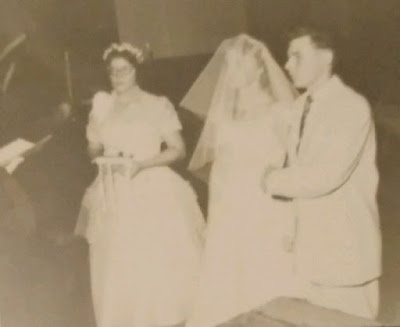