A Book To Think By: Saving Leonardo by Nancy Pearcey

“Because the word secular is the opposite of religious, many assume that the rise of secularism is a problem for religious groups only,” Pearcey says. “Not so. When politics loses its moral dimension, we all lose. When public discourse is debased, the entire society suffers.”
In this riveting account, Pearcey exposes the stealth secularism that permeates society through education, media, politics, art, literature, and movies. (from Nancy Pearcey's blog.  For the entire review you can go here) 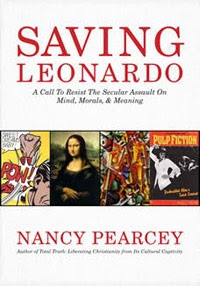 I'm reviewing a couple of books that were on my TBR pile that I bought for myself and were not given to me by a publishing company. They're excellent books and should shake off the notion that Christian literature is limited to self help non fiction or mediocre fiction.

The first one, Saving Leonardo by Nancy Pearcey, is one of many books and lectures that I have been reading and listening to that confronts the image that Christians are not intellectual or cultural leaders in our society. Pearcey has so much meat and thought provoking essays that I rank this book right up with anything C.S. Lewis wrote and as a sequel to Francis Schaeffer's book, How Should We Then Live?

Pearcey takes us on a trip through history showing how originally Christians were the intellectual powerhouses of Europe and were the ones to develop Europe from tribal savagery to a sophisticated society. This is in line with many other sources I've read. It was the Christian church that started the universities, hospitals, orphanages, were the forerunners of fine art and preserved writing and history.

Then in the 17th century, the “Enlightenment” thinkers came and decided that life had no meaning and the only thing any one could believe in was what they could quantify. This created an upper story/lower story mentality that resulted in our society, including Christians, believing that anything “scientific” was objective and anything that had to do with God or religion was subjective.

Pearcey traces the development of this thinking, how the philosophies of Immanuel Kant and Voltaire colored Darwin's thinking, giving him a predetermined interpretation of his findings and consequently the development of his theory of evolution (yes folks, it's still a theory-yet to be proven) and the consequences of his “scientific discoveries” that we are living with (or suffering from) to this day.

She exposes the hypocrisy and circular thinking of secularists, showing how when they reject the truth of the Bible they derail their own ability to understand truth. One highly relevant example is the pre born child. When Roe vs Wade was in court, the conclusion of the courts was that it was impossible to know when life began so the woman's right to privacy took precedence. With today's technology proving beyond a shadow of a doubt when a baby's life begins, the secularists comfortably changed their argument. Now it's now longer a matter of when life begins, but rather who is a person. Unfortunately, secularists can't agree on who qualifies. In fact in order to prove their points on any subject they have to disqualify their own line of thought from the, “nothing is knowable” philosophy they impose on the rest of us. They continually defeat their own argument against absolutes by asserting one absolute argument after another.

According to some secular philosophers, many people who have already been born aren't qualified to be considered a person with all the rights a person is entitled to. And, of course, the downfall of the person hood amendment in Mississippi is an excellent example of a population group who are mostly pro life refusing to take a stand for pre born babies. No doubt their “upper story” believed in the person hood of pre born babies, but their “lower story” told them they weren't allowed to impose their personal beliefs on others. The secularist culture has done its job well.

Pearcey describes how secular thinkers have taken over as leaders in science, art and popular culture-not to mention public education- and this has impacted our society in profound ways. But she also explains how Christians can once again become vital leaders of culture and shed our anti-intellectual image by using our minds and becoming engaged in the public arena. Not just how we vote but in the world of music, fine art, literature and philosophy.

One group who is attempting to do that are the writers of World Magazine. “World” is a Christian magazine that engages the culture in a relevant way in the areas of sociology, politics, news around the world, art, music and philosophy that I have never seen in any other Christian magazine. They are now in the process of airing a radio show constructed along the same lines as NPR- only from the Christian worldview rather than the secular. I hope they will also play classical and jazz music.

In my next post I will be reviewing a very interesting book by Gene Edward Veith called, The Spirituality of the Cross. This is a thought provoking look at the history of the Lutheran church.

Posted by Sharon Wilfong at 4:28 PM

Hi, there! I haven't been here in a while... Well, I was browsing around on Book Blogs, and came upon your comment in a Forum topic. It piqued my curiosity, so here I am!! And am I glad I came over!!! This is a book I will have to put on my TBR pile for SURE! Fascinating stuff! I'm heading on over to your review!!!

Thanks for sharing this very important information!!! : )

Thanks, Maria!!
Have a wonderful weekend!