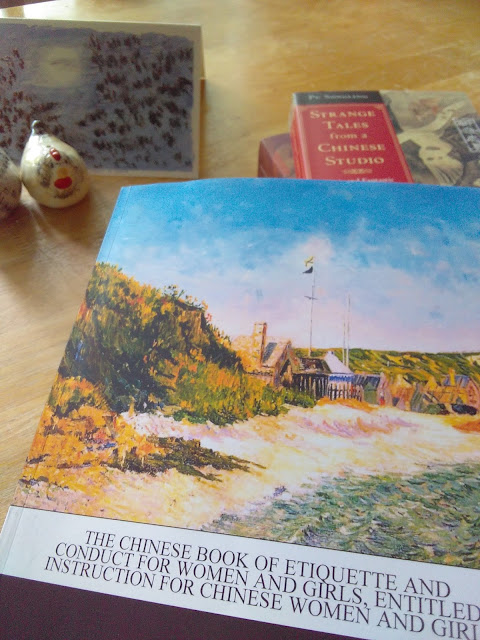 
Written almost 2000 years ago during the Han dynasty, Lady Tsao was a widower and brother of Pang Ku who was president of Hanlin College, the first college of the empire. Pang had been writing the history of the Han dynasty when he became blind. He recommended his sister to the Emperor as a qualified writer and historian to complete the task. Due to the request and gifts of the Han Emperor, Lady Tsao came out of her self-imposed isolation after the death of her husband to finish the Han histories. Her writing so satisfied the emperor that he asked her to serve as an "Instructor of Women." This book is a compilation of her teachings.

It was translated into English one hundred years ago by a Mrs. S.L. Baldwin who served as a Chinese Missionary many years. Her vocabulary in the introduction will probably come across as archaic and even offensive to some (as she refers to the Chinese as heathens), however, she is more complimentary toward the Chinese than she is negative, considering their culture as far more advanced in literature, education and etiquette at a time when the West was still suffering barbaric invasions and widespread illiteracy.

The purpose of the book, while not stated explicitly, seems to imply that the translator wanted to provide the West with a better comprehension of Chinese culture and to hopefully enable them to appreciate and understand a country that, at the time, must have seemed wholly foreign to them.

The book is divided into several sections that instruct woman as to how they should conduct themselves as daughters, wives and mothers. One chapter describes the cultivation of virtue, another the sort of work a women should employ herself with, another on how to behave towards her parents, her in-laws and finally on how to treat her husband.

Largely, a woman's role was to be subservient to everyone. She should not talk, and then only quietly, behind a fan. As a child, she should not run, shout, play or leave the house but only quietly work with her hands.

As a wife she should carefully prepare her husband's food to be ready when he arrives from work, making sure it stays warm. She should feed him first, then her children and finally herself.

As a daughter-in-law she should rise early, before her in-laws and prepare their food and wait for them to help them with dressing, and also to clean their rooms and make their beds. At night she should anticipate their return to the bedroom and should dress down the beds for their rest and have tea ready.

A woman or girl should never leave her house or talk to strangers. She should rarely talk and then only in the most formal of manners. In all things she should show only a gentleness of manner that creates harmony wherever she goes.

I think you get the idea. The part about making silk was interesting. I was hoping for more enlightenment on particular cultural practices, but only got a primer on how woman should act with everyone: as a quiet, gentle servant.

One wonders how many women put this into actual practice.

I hope not many. Not because women should not be altruistic. Harmony is created in a family when each member acts selflessly, but because if a woman were to actually carry out this sort of conduct she and her family members would tragically remain strangers to each other.

Formal manners are fine for company, but couldn't a wife and husband act a little more naturally toward each other?

Sadly, I think many cultures have created these kind of barriers between the sexes and perhaps is why these same countries have a long historical practice of prostitution. I mean, who's a man going to talk to when his wife only acts in the most reserved manner towards him?

Nevertheless, whether this code of conduct was more theoretical than practical, it is interesting to read what was at least expected of women during a certain epoch of time. Knowing the ideal of a country allows one to better understand the values that helped shape its culture. 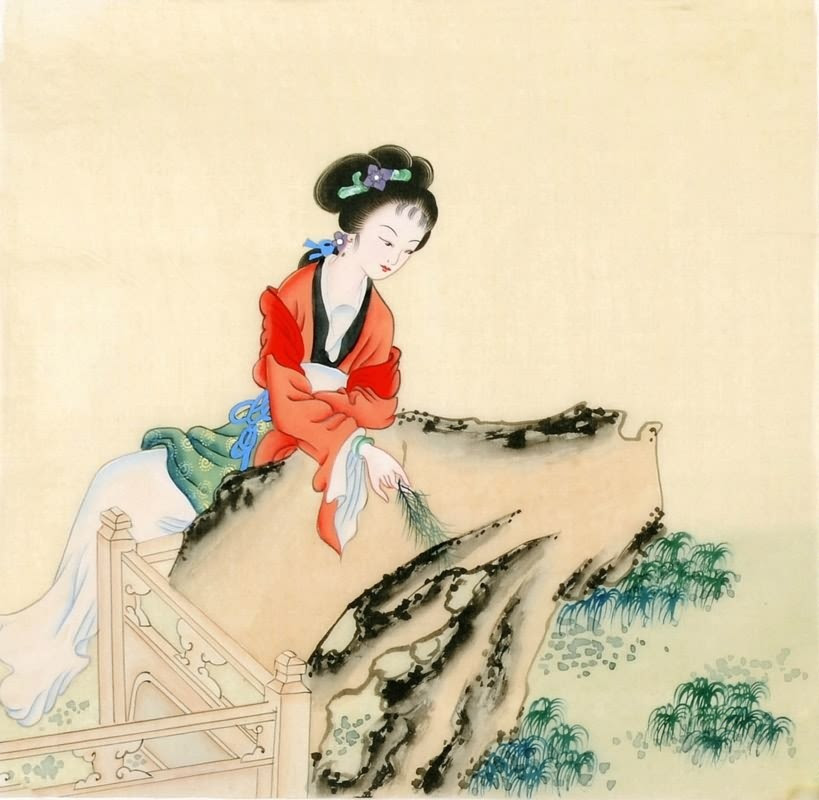 Interesting point about prostitution. (But I wonder what the American male's excuse is. Hmmm, I can take a guess.)

Too bad I didn't know about this book a few weeks ago. My daughter wrote a paper on women in Asian culture (how their social behavior is different from America, although she was looking at the present culture. I wonder how much of this is still practiced today in China).

Have you read Christine de Pisan's _The Treasure of the City of Ladies? If so, how would you compare the two?

i've had a sometime interest in the Han dynasty, exploring taoism and the roots of zen; it's a fascinating place, replete with social oddities and spiritual excursions of one sort or another... i like the many versions of "Plum Village": basically a sci fi story about a man who accidently discovers a village of friendly people: he stays over night and when he gets back home, his wife has died and his children are old... it's kind of a parallel of the Welsh fairy story about travelers being trapped in fairy rings... sort of a time paradox mystery... nice post, tx...

A peak into the past of this sort is always interesting. As you mention, I also wonder just how rigorously this was put into practice. Sadly if it were, the results would no have been good for anyone.

Even if not too many people actually acted like this, I think that it is useful and interesting to know that this was someone's idea of perfect behavior.

That's a good question for discussion. I wonder what the sociological reasons are for men in this country seeking prostitutes. Especially since a "hook up" culture is acceptable to a large segment, maybe even the majority, of our society.

My observations of modern Chinese women, an this is purely anecdotal, is that they pretty much run the roost. At least when they get into the position of matriarch.

Hi Fred. I just read up Pisan's Treasure of the City. It looks interesting and it would be worth comparing the two, although Pisan's book comes about a thousand years after Lady Tsao's.

Hi Mudpuddle. I've never heard of Plum Village" but I would like to read it. I am currently reading "Strange
Tales from a Chinese Studio" which is a collection of ghost stories by Pu Songling. He uses these stories to make critical insights into contemporary Chinese cultures, which was the year 1679.

Welsh stories also fascinate me. Have you read the Mabinogian?

Hi Brian. I agree. As with the Arthurian legends, whether men actually strove to act like Sir Gawain. We know it was an ideal that people valued which tells us much of that time period and its culture.

Sharon: i've read parts of it; i was led there by my interest in Robert Graves...

i have a collection of pu songling tales; i just haven't read them... yet...

I am finding them (songling tales) interesting more for what they reveal about Chinese culture than the story line which runs along the same themes.

As for the Mabinogian, it was great reading for me at the time. I have not read them recently. I haven't read a lot of fairy tales or Arthurian legend recently.

I wish I could read while in a moving vehicle, it would certainly help my TBR pile, but it makes me feel very ill! So you have my admiration for that, and this book sounds fascinating.

I have read about Chinese culture before, but I didn’t know a daughter in law was expected to dress her in-laws that would be a step too far for me!

Hi Barbara. I find that reading while doing mundane things like traveling or exercising helps the time go faster.

A lot of things that Chinese women were expected to do were more than I would like to do. It was a prohibitive life!

Your review of this book is timely and of much interest to me because I've just finished listening to the audio version of The Tea Girl of Hummingbird Lane by Lisa See, which has quite a bit of Chinese culture included. Although fiction, it takes place in recent years and has some surprising customs about one of the ethnic minority groups.

Hi Marcia: The Tea Girl sounds interesting. I'm going to have to look it up. I've often wondered how much of Chinese culture has survived Communism.