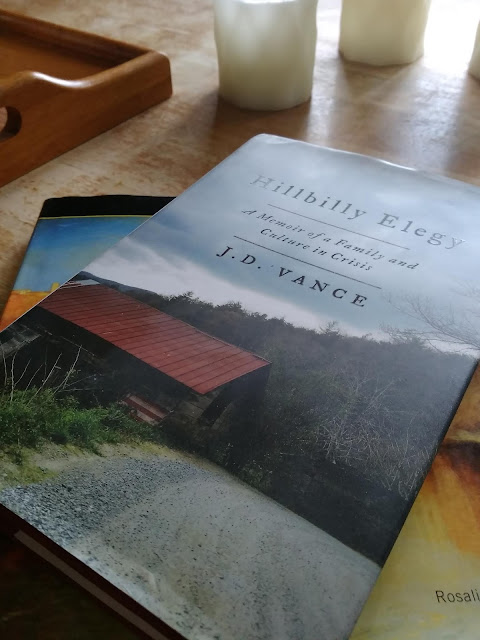 A wonderful saxophonist and I performed the third movement of Lawson Lunde's Saxophone Sonata.  This summer I am learning the first two movements because we'll be performing them as a part of a recital this fall.  After we record, maybe I'll post the link to our performance.  In the meantime, I hope you enjoy Tom Walsh's rendition.

Hillbilly Elegy: A Memoir of a Family and Culture in Crisis by J.D. Vance


This book was not what I was expecting. What was I expecting? An adequate description of a largely forgotten ethnic group in America: the poor whites of the Appalachian region. I also thought the author was going to provide lucid reasons as to why this group is forgotten, why they are so poor and what solutions might help.

This book is part memoir, part sociological observation and I would also say part therapy for Mr. Vance to work out his own feelings and anger at the bum deal he got growing up in poverty with a mentally ill mother, revolving door of fathers and dysfunctional extended family.

J.D. Vance was born in Appalachian Kentucky to poor parents that did not stay together. He describes his extended family as largely dysfunctional due to alcohol and drug abuse. He seems to consider this a unique trait of the Appalachian region when in fact it is the life story, indeed symptomatic, of most poor people regardless of race or region, urban or rural.

However, being poor does not necessarily equal trashy. Vance seems to revel in just how trashy his parents, and especially his grandmother could be. For those of you not from east Texas (where I live) "white trash" is a term to describe behavior more than economic level.

Basically white trash is someone with a filthy mouth that usually has a Marlboro hanging out of it, who does not mind starting fights over the most trivial of reasons at ball games ("my son wasn't out you ----- of an umpire! I'm gonna slash yer tires!"); with their neighbors ("yer dog pees in my yard one more time, I'm gonna shoot his legs off!")

Or like my neighbors behind me. Their stupid Schnauzers kept barking at my dogs, who then proceeded to eat their way through my fence to get at them. The old lady would jump on the fence and scream she was going to sue my a--- if I did not control my dogs. Some people are so edgy.

I should also mention that "white trash" really isn't limited to an ethnic group, either, but that's beside the point.

There is more to people than swearing, dropping the f-word like piles of excrement everywhere they go; drinking themselves blue; and getting into fights both domestic and with everyone else, but you would not know it from Vance's description of his family.

Especially his grandmother. He talks of her fierce love and loyalty to her family, but it was not enough to keep her and his grandfather from trying to kill each other over every minor offense. Or his grandfather from coming home drunk and keeping his two daughters, one of them Vance's mother, in constant upheaval and fear.

Vance's mother grew up to be a drug addict and alcoholic. She had a constant stream of men living with her, which makes me think she must have been attractive on one level, but her violent tendencies usually chased them away.

At one point he goes to live with his birth dad who gave him up. It turns out that his father really wanted him, but the custody battle became so nasty, he thought it was in his son's best interest to just stay away.

His father had by this time converted to Christianity and was Pentecostal. While he respected how religion helped his father get his life together, keep a stable family without domestic squabbles (he was impressed how nobody in his father's house screamed at each other, the normal form of communicating in his mother's home), he felt that Christianity produced too much of an "us and them" mentality and after a few years returned to his mother's, breaking his father's heart.

At this point Vance makes some general remarks that the average Southerner as a church going Christian is a myth and that "Bible belt" actually has the lowest church attendance in the country. Where he gets his information he fails to say.

He also makes an obvious conclusion that people are products of their environment. And yet he admits that is not always so. His sister did not turn out like their mother and their mother's sister grew up to have a stable life and marriage. He does not dig into why this might be so.

He also describes his own success. He became a marine, went to Ohio State and eventually Yale Law School. His methods of success is interesting. Basically you need to network and befriend someone already "in" to get a job. Don't think your resume alone is going to hire you. I would like more information from other sources on that.

In fact, I would like to read other sources of information about Southern poverty and particularly the Appalachian region.

I read this book in one sitting because I found it rather unpleasant reading and wanted to get it over with as soon as possible.

View all my reviews
Posted by Sharon Wilfong at 9:36 PM

Great review Sharon. This book has been very popular. I completely agree, being poor and being trashy are not the same thing. I also have been reading how blue color white Americans are the only demographic group in America that is actually going backwards in terms of things such as standard of living, life expectancy, etc. This has been a forgotten demographic. I wonder if there are other books out there that better describe folks who poor and white in America.

Wayne Flynt has produced two books on white poverty that you may find of interes -- "Dixie's Forgotten People", and "Poor but Proud". The former is on poor whites in the south generally, and the latter focuses on Alabama and has much more content.

Thanks ... I will avoid the unpleasantness .... I will instead embrace old books by dead writers .... btw .... technology and bad brain waves crashed my blog .... new digs ....
https://rtinformalinquiries.blogspot.com/

books like this seem to be written more as therapy than analysis... people in general are less civilized today than they used to be, apparently... i attribute it in part to overpopulation and undereducation; also to poor role models: if movies and politicians don't behave in a civilized fashion, how can we expect "normal" persons to live rational lives...
not a book i'd choose to read, but obviously was informative in some respect; as an example of how not to live, if nothing else... an honest review, and one that discusses a little mentioned topic... tx...

I think that drugs and alcohol are playing a dastardly toll on our society and poverty is the result.

Hi Stephen. Thanks for the recommendations because I would like to read more sources about this sub-population group. I will look them up.

Hi R.T. I'm so glad to know you're back in business. I'm on my way to your blog!

Hi Mudpuddle. I could not agree with you more. Unfortunately people have closer relationships with TV personalities than their neighbors and they live under the illusion that aberrant behavior is normal.

I cannot believe how common courtesy, respect and civility have disappeared on late night TV. It's as if everyone is stuck in middle school mode.

And I do think Hillbilly Elegy was a kind of therapy for the author. He seemed to be trying to work out a lot of the anger and confusion he has experienced from growing up in such dysfunction.

This book was quite popular when we first got it in at the library, but check-outs soon dwindled. It doesn't sound like one I would like. I'm enjoying the saxophone music while I type. Good luck practicing for your recital!

Hi Marcia. I think that the author fooled people into believing he was being some kind of advocate for an under-represented people group, but he really was not.

Thanks for your thoughtful review! I have heard a lot of hype over this book, but you've confirmed my doubts about it.

I felt deceived, to be honest. I got the impression from certain newspaper reviews that it was going to be advocating for the people who were accused of being "deplorable" because they didn't vote for Hillary Clinton. Instead it was a reaffirmation that anyone who voted for Trump was ignorant white trash.

Great review, Sharon! I'm new to your blog and have been enjoying it. I read this book some months back; I was interested in it because I grew up in the same culture -- though, thankfully, my immediate family wasn't a similar train wreck. I agree with many others that the book seemed like a personal catharsis for the author, though in pondering some of my extended family, and others I knew, I could relate to much of what he wrote.

Hi David! Thanks for commenting. My dad also grew up in this kind of environment, but he became a Christian as a child, the first one in his family to do so. I think you're right that the author was trying to weed out his feelings and achieve some kind of closure.