The Last of Philip Banter by John Franklin Bardin

I am listening to Bach's Short Preludes and Fuges for the organ on my record player.  You can listen to them here on Youtube. 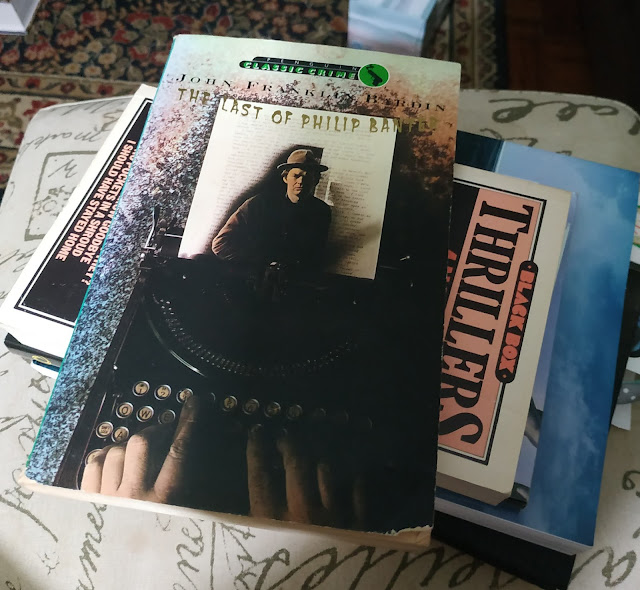 This was a rip roaring good story. The quality of the writing exceeds the average entertaining mystery. It was like a cross between The Lost Weekend and characters of Crime Noir with a dash of Girl on a Train, except the writing was far superior to the latter.

It was superior to most mysteries as far as writing style and plot development are concerned.

Without giving anything away here is the premise:

Philip Banter has a serious drinking problem. He knows this. He knows he's a louse to his wife and narcissistic enough to believe that every woman he winks at wants him.

The story starts with Banter waking up at his desk in the office where he works as an advertising executive. In front of him is his typewriter, uncovered and recently used. Who used his typewriter? Was it him or someone else? Where was he last night and how did he end up here?

His wrist is bandaged. It wasn't bandaged last night. On the desk is writing. Fifteen pages. He reads it. Written in the first person, he reads about events that happen from his point of view: According to the paper, he goes home to his wife, who surprises him with an old friend and his girlfriend coming over.

It speaks of him having an affair with the woman and then coming to his office. Is that what happened last night?

Except. The date on the writing is for the following night. How can he or anyone have written about the future. He forgets about it.

Then. That night, everything starts happening as the writing predicts. Sort of. Not exactly.

So what is happening? Is he crazy or is someone trying to persuade him that he's crazy?

This is a well written compelling psychological suspense mystery without any down time.

Unfortunately, John Franklin Bardin only wrote a couple of really good mysteries, but I am going to read them because he is now one of my favorite mystery authors. 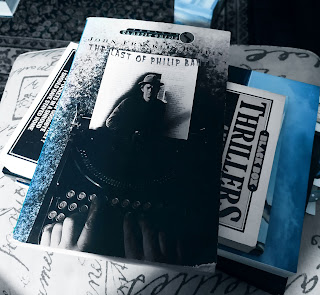 Posted by Sharon Wilfong at 1:40 PM

we who read a lot of mysteries get used to seeing the same plot repeated endlessly with variations. it usually doesn't inhibit the pleasure the genre gives, but how refreshing to find an entirely new plot! i'll have to look for this in the library...

I’ve added this to my BOLO list for my searches of library and used bookstores .... I need a good escape right now ....
Tim / RT
https://miscellaneousmusings2021.blogspot.com/

It is definitely true that many authors who write a series have a definite formula and I agree that I enjoy them the way I enjoy Hershey Bars. Not great quality, but tasty.

I hope you can find this book and that you will enjoy it.

I hope you can find the book. Have you changed blog addresses? Let me find out.

Sounds enticing! When was it written, Sharon?
I've read a few hard boiled American detective novels this year - Raymond Chandler, Dashiell Hammett & someone else whose name I've forgotten. Not my usual fare but I thought the writing was good. I never knew what was meant by hard boiled i=until I read them. :)

It was written in 1947. I think this story is almost a cut above Chandler and Hammett because it goes by an original formula and makes use of psychological displacement.

I enjoyed this one better than either of the above writers, maybe because Barden's characters live by a stronger moral code, although the bad guys not so much.