The Navajo Code Talkers by Doris A. Paul

I've always been interested in learning more about the group of Navajo Indians that were used to communicate in code during WWII. So when Dorrance Publishing CO. offered a complimentary copy of such a book in exchange for an honest review I eagerly requested a copy.


Doris A. Paul wrote The Navajo Code Talkers in 1973. The fact that it is currently in its fourth decade of publication is testimony to the fact that it is a well-written, well-researched and credible documentary of General Cates's Fighting Fourth Marine Division of Navajos and their significant contribution to the Allies' success in the Pacific Ocean Theater.

Paul includes many interesting facts about the Navajos and how they came to play such an important role in WWII. Prior to the war, the Navajos led a primarily isolated existence. Few of them had ever left the reservations or could even speak English. What prompted the Navajo nation to serve in the War? According to the Navajo Tribal Council at Window Rock, a unanimous vote on June 3, 1940 took place passing the following resolution (which I quote in part):

Whereas, the Navajo Tribal Council and the 50,000 people we represent, cannot fail to recognize the crisis now facing the world in the threat of foreign invasions and the destruction of the great liberties and benefits which we enjoy on the reservations....
…...we resolve that the Navajo Indians stand ready as they did in 1918, to aid and defend our government and its institutions against all subversive and armed conflict and pledge our loyalty to the system which recognizes minority rights and a way of life that has placed us among the greatest people of our race....(Chapter 1, pg. 2,3)

But it was Philip Johnston, a white missionary kid who had lived with the Navajos since the age of four and who himself spoke Navajo fluently, that came up with the idea to use the Navajo language as a code.

It was not the first time that Native Americans were used for communications in war. Many tribes, speaking their tribal tongue, were used with great success when communicating across enemy lines in both Europe, Africa and the South Pacific. This was the first time, however, that an Indian language was used as a code. Paul describes how this language was used and has comprised an exhastive catalogue of all the code words and alphabet letter codes.

Also included are many photos of these courageous men in action.

The Navajo Code Talkers not only provides a full account of the history and work of these First American Marines, but also combines many personal accounts that are both humorous stories as well as suspenseful. One of the biggest dangers for the Navajos was being mistaken for Japanese. More than one Navajo found themselves in danger of “friendly fire” until someone from their unit could verify their identity.

On a lighter note is the description of these “Native Marines'” reaction when they heard of the Japanese' surrender:

The Navajos' innate imperturbability was thoroughly and completely shattered when early one night in August, 1945, news came over the division radio net that Emperor Hirohito had asked for “peace terms.” Naturally the Navajos were the first to learn this good news. The overjoyed Navajos decided that a celebration was in order. As tom-toms were not items of issue, they headed, au naturel for the bandsmen's tents. Grabbing drums, and later any instruments available, they Indian-danced their way toward the officers' tent country. The bandsmen, also au naturel, were in hot pursuit trying to retrieve their drums. (Chapter 7, pg. 96)

One thing that I found disturbing and caused me to rethink the heretofore one sided view we've been presented about the Japanese internment camps in America is the following quote:

American forces were amazed to discover the ability of the Japanese to speak English without a trace of accent or Oriental inflection- but the mystery was partially solved when it was found that many of the dead Japanese wore American high school class rings, and that many of the officers were graduates of American universities. (Chapter 6, pg. 67)


Then there was Tokyo Rose. This was a name that the American troops gave her, she actually called herself “Orphan Annie”. Tokyo Rose was a Japanese American who was visiting relatives in Japan when the war broke out. During the war she served as a media propagandist, basically serving Japan by attempting to break the American soldiers morale and spirit with disheartening messages over the radio. I looked up Tokyo Rose on the internet and the first available sources try to white wash her work for the Japanese or even dismiss it as mostly urban legend. One source says that later this woman justified what she did, calling it “entertaining satire.” As I mentioned at the beginning of the review, this book was written when many eyewitnesses were still alive.  The following is a quote from one of the author's sources:

This is what she (Tokyo Rose) said that morning over the radio before the men hit the beach: 'We know where you are.....about to try to take Gloucester. But back home the 4-F's are lying easy and having a good time with your sweethearts...your loved ones that you left at home. People are having a great time in the city of Los Angeles, Denver, Kansas City, YOUR city. They're praying and they're hoping and they're saying, 'Please, God, let this war go on four more years at least. We're getting rich; we're making good money; we're having such a good time.' Your very sweethearts that you trust-your wives- they're in bed in the state of Utah, Arizona, Ohio, Texas, Pennsylvania. Think about that, First Marine. Think about that. You're about to hit the beach. Think about that! (Chap. 6, pg. 69)


I don't know about you, but that doesn't sound like satire to me.

The book continues after the war to follow up on the Navajo marines, how they were honored and how their participation in the war opened up the world for the Navajo nation. Prior to the war most Navajos refused an education.

Before 1946, officials of the Bureau of Indian Affairs had to round up Navajo children, practically kidnapping them, to force them to go to school. After the war, they couldn't hold back the tide. The whole educational system had to be revised to meet the demand. (Chapter 8,  pg. 108)

All in all, I found this book to be an enjoyable, interesting and informative read. If you like to read about history, war stories, linguistics, codes and Native American culture, then The Navajo Code Talkers is the book for you. 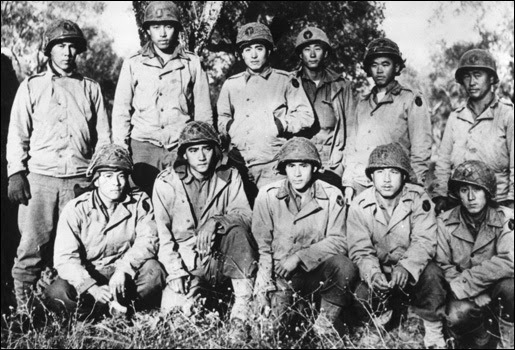 Posted by Sharon Wilfong at 1:46 PM

Great review--and sounds like something I'd really love to read--thanks! Glad I found your blog! Am excitedly following you on Blogger now! - Wendy Lawrence

Thanks for linking up to NOBH. I love your banner as I am gently mad too about books. My husband bought me a Kindle in the hope to declutter our book case...it hasn't worked:) I had the privileged to visit the museum for the the Navajo code talkers when we did a camping trip out west. It was very interesting Now following hope you will consider following back:)

Wendy and Adventurer: Thanks for stopping by. I'll definitely be visiting back.
I didn't know about the Navajo museum. I'll have to check that out. Have a great day!

My family got to meet a Code Talker on Veteran's Day last year. Quite inspiring! I'm a new follower via the Friday over 40 blog hop.

@ Mel U. I hope to participate in the Irish Short Story Week. I think I already know what story I want to review.
@ MustardSeedReads: How exciting! I wonder how many Code Talkers are still living?