This week's Literary Blog Hop question: Does the popularity of a novel predispose me to like or dislike it? Answer: The fame or popularity of a novel may motivate me to read it but I am particularly independant minded when it comes to what I like. I've never liked a book (or anything else for that matter) simply because it's fashionable to do so. I'm definitely an "upstream swimmer". Speaking of popularity, please enjoy my book review on an author who wasn't popular during her own lifetime but has since gained the fame her writing deserves. 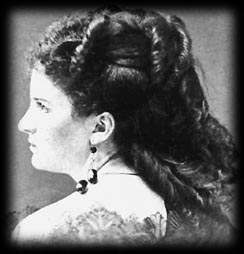 Kate Chopin was one of the most polished writers to ever grace a page with the art of written expression. Her ability to create imagery and local color in such a way that allows the reader a delightful vicarious experience of bayous, 18th century Southern French culture and dialogue expressed by Cajun or French American tongues is in a class of its own.

She was also moral reprobate.


I admit that is not how Lorraine Nye Eliot describes Chopin. In her book The Real Kate Chopin, she uses the contemporary terms acceptable to today's modern feminist:

Kate Chopin is best known for her novel, The Awakening, the beautifully told story of a young woman's awakening to her own identity as a free and sexual being, which puts her in a tragic conflict with the expectations upon her as a woman, wife, and mother in the puritanical America of the 1890's.(From the back cover)

This theme runs throughout this thorough biography of Kate Chopin. Anyone interested in the life of this brilliant but controversial writer will enjoy reading Eliot's description of Chopin's childhood, family upbringing (strict Catholic), happy but unfortunately short-lived marriage (her husband died relatively young) and subsequent efforts to get her work published.

One would fain beg the gods, in pure cowardice, for sleep unending rather than to know what an ugly, cruel, loathsome thing Passion is.....There is no fault to find with the telling of the story, there are no blemishes in its art, but it leaves one sick of human nature and so one feels-cui bono (to whose benefit)! (pg. 118)

Even Willa Cather “scolded Kate Chopin for 'devoting so exquisite and sensitive, well-governed a style to so trite and sordid a theme.'

Cather flays Chopin...for creating characters 'who demand more romance out of life than God put into it.' Their female characters 'expect the passion of love to fill and gratify every need of life, whereas nature only intended that it should meet one of many demands.” She concluded the review with the hope that next time 'Miss Chopin will devote that flexible iridescent style of hers to a better cause.'” (pg120.)

In point of fact, I agree with both Percher and Cather on Chopin's work as much as Eliot disagrees with them. She lauds Chopin's philosophy of “freedom from societal constraints” and loathing of “preaching moralists” who “oppress others with their sense of right and wrong.” Neither Eliot nor Chopin seem to view their own writing as preachy when propagating what they believe is right and wrong.

Chopin is indeed ahead of her time in believing that women who are not happy in their marriages should be free to divorce and marry someone else or simply take on as many lovers as they so choose. She was not ahead of her time when she failed to see the repercussions of such a philosophy that has scourged our society for the last fifty years. I worked several years in public school and saw first hand the price children pay when they grow up in single family homes or, as is increasingly the case, raised by their grandparents when their parents choose to embark on the “sexual emancipation” and abandonment of their children (as Chopin's heroine Edna does in “The Awakening”). The rise in emotionally disturbed children, angry, unstable children having to raise themselves because no one else feels obligated to do so daily breaks my heart.

Furthermore, as honestly as Eliot charts Chopin's life (and she does a great job of it, quoting several excerpts of letters and diaries) she fails to see, as Chopin failed to see, that her happiest years were when she was married. After her husband died and she decided to live out the lifestyle she wrote of in her books (she had numerous lovers) she developed severe depression. Of course Eliot would blame that on societal norms, but the fact is Chopin wasn't rejected by society even if her literature was. She had many friends (and lovers) and an active social life. Nothing fettered her from doing what she wanted. Nevertheless, the happiness she enjoyed as a child inside the frame of an intact, deeply religious family as well as the joy she experienced as a married woman eluded her during her own “years of emancipation.”

Personal commentary aside, if you are a lover of Chopin's literature and want to know more about one of America's most eloquent writer's life and career, Eliot's book is an excellent resource.

If you buy this book, please do so through my link so I can get a small percentage back, thanks!

Posted by Sharon Wilfong at 7:50 PM

Hi, thanks for finding me today. I dropped by and I'm your newest follower #111

Hello! Thanks for visiting and have a great week!

Thanks for introducing me to a new (old) writer!

She really is an eloquent writer and if you've lived on the Gulf Coast like I have you especially appreciate her ability to describe the environs of her character. Have a great day!

It seems that the majority of us writing these here, Book blogs are contrary, possibly cantankerous (or is that just me?) self willed individuals, who will let ourselves be guided by a classic status, but no way will we be swayed by such shenanigans, no way sirree. which is a good thing, as the status tag, should merely be a signpost, not the whole route map.

@ Parrish Lantern:Maybe it's just me or maybe it's the way you express yourself but I find myself reading your words with a British accent;)
I'm so contrary that even when I love a book I find myself unable to like it for the reasons most others do. Hmmm....Or even consider the characters in the same light...

Sounds like a fascinating book!! I agree wholeheartedly that the increasing divorce-rate is crippling society, as children raised in broken homes reach adult age (though not necessarily those raised in single-parent homes, as some such homes are more joyful than they were before the abusive partner left).

I don't know if I believe, either, that Chopin was happier before she tried emancipation. That's such a subjective statement, I don't know if anyone can really know, except Chopin. I agree, absolutely, that her book The Awakening was explorative, not preachy, as was the one short story I have read by her, so far.

Thanks for sharing this! I'm curious about Chopin. :-)

Jillian: I can only answer you with the words of St Paul: "I have learned the secret of being content in any and every situation, whether well fed or hungry, whether living in plenty or in want. I can do everything through Him who gives me strength." (Philippians 4:12-15)

True joy and happiness is not a slave to circumstances or environment. It certainly isn't bought at the expense of others (such as abandoning our family)

Knowing I'm loved by God enables me to love others. True love produces true joy. Love is unconditional and it's eternal.

Thanks for taking the time to visit my blog. I may disagree with Chopin's phiolosophies but I think we both agree she's a beautiful writer. (So's Flaubert).

I've enjoyed reading your blog (I've suscribed to it in my e mail:)

Many blessings to you.

Really enjoyed reading this post, but have to confess I'm feeling embarrassed now, in that I'd never heard of Kate Chopin, and I consider myself well-read. I must get started on her works, because hers sounds exactly the kind of writing I love.

Very glad to have found you, and I will definitely return.

Deborah: I know what you mean. I've come to know about all sorts of wonderful books through reading other people's blogs. Thanks for visiting. I'll have to come visit you now.