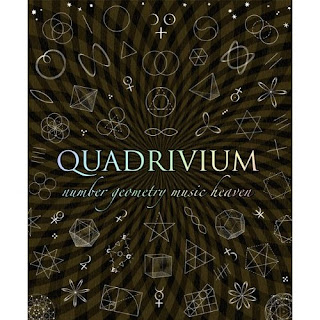 The Quadrivium was first formulated and taught by Pythagoras as the Tetraktys around 500 BC…it arises out of the most revered of all subjects available to the human mind-Number. The first of these disciplines we call Arithmetic. The second is Geometry or the order of space as Number in Space. The third is Harmony which for Plato meant Number in Time. The fourth is Astronomy or Number in Space and Time. (From the forward)
The Quadrivium is a fascinating book that I came across while browsing a local bookstore. It is made up of six books, each dealing with a different part of our reality as it is expressed numerically and proving how every facet of it has purpose, design and beauty. Each page is accompanied by beautiful illustrations showing the wonderful designs and patterns that are created when tracing formulas and designs of each concept.
Book one deals with the significance of number. For instance, what is one? One is the limit of all, alpha and omega, the mold that shapes all things, the origin from which the universe emerges. It is point, seed and destination. It is God. (pg. 12)
What is five? Children instinctively draw five fold stars. Water itself is an amazing liquid crystal lattice of flexing icosahedra, being one of the five Platonic solids. It’s found in apples, flowers, hands, and feet. Venus draws a lovely five fold pattern about Earth as she whirls around the Sun… Our most universal scale the pentatonic, is made of five tones... (pg. 20)
This book simply amazed me as it showed the connection between mathematics in rhythm, pattern, quantity and relationship at every level: the planets in the universe, patterns in microscopic life or flowers, plants, as well as harmony and music. What I especially found wonderful was seeing how the patterns planets make when moving around each other can be expressed musically-AND is matched in design by the formation of plant life and motion on earth.
Quadrivium was written in a time and by philosophers who saw learning as a holistic process, intertwining all the disciplines and putting them on equal footing-beauty and music with math and science. That’s a far cry from how subjects are taught today. As a musician who fights to get her field respected, this is highly significant to me.


It’s not an easy book to read, but an extremely rewarding one. I did, however, have to laugh at the last section called “Coincidences.” The writer is amazed and perplexed at what he observes. He describes “Sun Dogs” which make up a thin rainbow circle around the Sun. The writer exclaims:
Amazingly, these two ice halos beautifully match the mean orbits of the inner two planets Mercury and Venus seen from the surface of the Earth. This means that when you look at a double ice halo, you really are seeing the sphere of the mean orbits of Mercury and Venus, hanging in the sky. The same two ice halos also function as a diagram of the relative orbits of Venus and Mars.
This is an extraordinary coincidence. What is going on? Every circle fits. Sunlight and ice crystals paint rainbows for orbits. The Sun and Moon appear the same size in the sky. These coincidences are focused on us, here, and now, a planet of conscious observers. Is consciousness also part of the equation?
Plato writes that things are more perfectly organized than we can ever imagine. How do you balance a Sun and a Moon? Would we in fact be living in a conscious quantum holographic universe?” (pg. 350)
Hmm… I wonder Whose Consciousness is at work here?
Posted by Sharon Wilfong at 2:26 PM

Email ThisBlogThis!Share to TwitterShare to FacebookShare to Pinterest
Labels: Science