The Togetherness Routine by Margaret Pearce 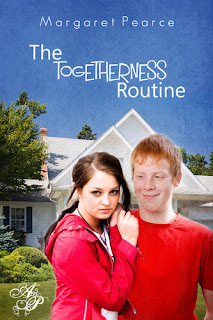 If this isn't bad enough, her mother supports Allen in everything he demands of Gail. Most shocking of all is when her boyfriend, Kelvin, decides that her mother and stepfather are right and breaks up with her. Don't they understand that Kelvin is the only stable male relationship she has in her life? Her real father trades in a new wife every few years and has no time for her. She doesn't want girlfriends because the girls at school are mean and spiteful. Gail hates everyone!  She hates her life! Can we smell the fragrance of burning martyr?

What I like about this story: Ms. Pearce has successfully gotten inside the head of a fourteen year old girl and drawn an accurate picture of how adolescent females think; how they perceive their situations, the dynamics between themselves and the other people in their environment.  All of us who have been young teenage girls remember how every problem in our life was a crisis of apocalyptical proportions, NO ONE understood us and NO ONE ever, ever, had the same problems we had. No one loved us, everybody hated us-let's run outside and eat some worms...drama, drama, drama.

What I especially found refreshing:  Ms. Pearce has chosen not to walk down the path well trodden by most YA writers paved with hyper dark angst story lines involving seriously disturbed teenage girls with either an eating disorder, suicidal tendencies or sucked into occultic practices (including falling in love with vampires). Yes, I know those are real issues (except the vampires), but are they every single teenage girl's issues? Is every girl's life that dystopian? What about the ones like Gail?  Isn't having to deal with an absent father and learning how to blend into a new family-a family you never asked for- hard enough?

What I didn't like: The story is too darn short!! Ms. Pearce introduces some interesting characters, such as the “mean and spiteful” girls at school who turn out to be not quite so mean or spiteful-at least not all of them. Gail's stepbrother, Matt who is instrumental in helping Gail branch out and get to know these other girls and improve her grades to boot has a lot of potential but just as we become interested in him and the others, the story ends. I sincerely hope there is going to be a sequel.

In conclusion: This is an excellent coming of age story for middle school-aged girls-many of whom can relate to the trauma of divorce and family breakdown and all of whom can identify with boy/girl attraction and girl/girl conflict.

I received this book for free by Astraea Press
For more information you can go to: