The Triumph of Truth: A Life of Martin Luther by Jean Henri Merle D’Aubigne (translated from the French by Henry White) 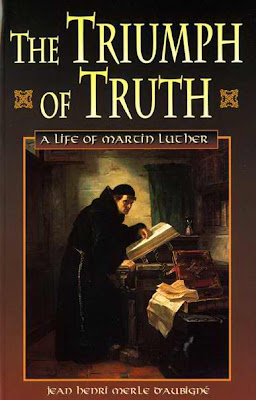 This book is valuable to read, not only because it chronicles the life of the founder of the Reformation but because the author wrote it in the 18th century. Consequently the style is quaint but eloquent.

Martin Luther is D’Aubigne’s hero. This is made clear from the get go by his almost fawning descriptions of Martin Luther, omitting any faults or negative attributes and his demonizing of the Roman Catholic Church. D’Aubigne’s opinions were not fettered by the narrow confines of political correctness or “cultural sensitivity” writers today feel obligated to conform to.

On the one hand it’s refreshing to know exactly where someone stands on a subject without having to read between the lines. On the other hand a certain amount of credibility is lost when it’s so obvious where the author’s prejudices lie.

On yet the other hand, it’s not as though today’s writers don’t write from a specific bias, we’ve simply had to become more clever at looking even handed. And besides, it’s not the bias that discredits a person’s viewpoint but whether the bias is a valid one or not.

Having said all that, I found D’Aubigne’s biography to be beautifully written, if stylistically dated, and highly informative of a man who has recently begun to fascinate me as I have become interested in more liturgical forms of worship. I’ve recently finished reading Luther’s Small Catechism, which is as solid an exegetical thesis on Christianity as I’ve ever read, not to mention his Ninety-nine theses and another book called “The Lutheran Difference.” All of these books break down in specific points what exactly it means to be a Christian and what precisely do we believe when we say we are a Christian.

Only a man as robust as Martin Luther could have had the gumption to take on the Roman Catholic Church. For those who aren’t familiar with Luther or the Reformation, the can of worms that Luther opened is that he translated the Bible into vernacular German. For over a thousand years, the Bible had been in Latin, the Church service had been held in Latin (and was until the 1960’s), a language that people, except an elite few (priests, scribes, etc.) no longer understood. (Ironically, the reason St. Jerome translated the Bible into the Latin Vulgate in the 4th century was that it was the language of the masses.)

Now, for the first time in Germany, the average citizen could read the Bible for himself, in his own heart language. This created complications, because people could compare the mandates of the Holy Roman See to what Scripture actually said and see if they were compatible.

It turned out that not all of it was. There is no mention of purgatory in the Bible. Or a paying for pardons, or praying for the dead, or a works-based salvation. Or anything remotely implying that a man could be an infallible Pope who had the authority to forgive sins and have power over people. In Luther’s Ninety-nine theses, he demands of the Pope that if he did have that authority, why did poor people have to pay exhorbant prices to receive salvation? Why didn’t the Pope give salvation away freely?

Needless to say, the Roman Church, did not take any of these challenges lying down. Luther had to go into hiding for a while but the can of Worms (pun intended-Worms is the city where Luther nailed his Ninety-nine theses) had been opened and the Holy Roman See to this day blames Luther for fracturing Christians into contentious groups.

It is true that different denominations got off to rocky starts and bloody wars were fought as a result. The wars didn’t go on forever, however, and frankly, another way to look at it is realizing that instead of blindly following one man who claimed to have sole authority given to him by heaven, every individual could now think for himself. He or she could read scripture for him or herself and commune directly to God without going through a human mediator.

One could argue that this also ushered in the “Enlightenment” era where people decided to reject God altogether. That may be, but I believe that people who reject God will do so regardless of whether they belong to a church or not. Compulsory church membership saves no one.

Martin Luther, a monk who had once been plagued by guilt because he realized all his good works could never save him, realized it is by grace alone a man can be saved.

The main difference between Catholicism and Protestantism is that Catholics believe that good works are instrumental in producing salvation (along with taking the Eucharist) and Protestants believe that salvation is by God’s good will alone and afterwards produces good works. That’s an oversimplification, but still the bare bones truth.

Luther lived long and had a wife and children but his last days were very sickly and it’s possible he became mentally disturbed. He was a turbulent, fiery and at times, highly antagonistic individual, but you won’t hear about any of that in D’Aubigne’s account. However, in a future review I’m going to discuss Table Talk, a collection of Luther’s actual sayings. Reading his quotes, one can see why many people-not only the Catholic Church- could become offended at his inflammatory language.

Even Hitler used some of his quotes to incite anti-Semiticism in the thirties and forties.
Many of these quotes were taken out of context and also were said when he was extremely ill. Still, I won’t justify his words.

Luther was a sinner saved by grace. If you don’t believe in sin, then don’t judge him.

As an aside, Luther’s translation of the Bible not only helped set off the Protestant Reformation but it also codified the German language and united the Germanic speaking peoples.

If you’re interested in the life of one of the major movers and shakers of the Western world, D’Aubigne’s biography would be a good (but shouldn’t be the only one) source to start.

I bought this book.

Posted by Sharon Wilfong at 7:52 PM

I have planning to do some reading on Luther for some time. As you mention this may be one of good but not exclusive source.

I agree with you about bias, there is nothing wrong if a writer shows it, as long as they are honest about it, attempt to support their contentions, etc.