The Art of Readable Writing by Rudolf Flesch 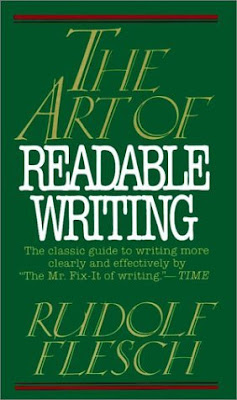 Even though Flesch wrote his book in the 1940’s, it’s instruction is relevant for today’s writer.  I found The Art of Readable Writing to be an entertaining and interesting way to learn how to write better.

The book is made up of twenty-one short chapters.  I spent a couple minutes each day just reading one chapter and absorbing whatever point it made.  He starts with debunking Aristotle (“his rules were meant for political speeches, pleadings in court, and funeral orations.  You’ll have rather few occasions for these three types of writings”) although, I still recommend reading Aristotle’s books on rhetoric and writing. (Besides, they’re free downloads on Amazon).

Chapter two discusses getting inside other people’s minds in order to effectively communicate your ideas.  Don’t assume your audience knows more than they do.  In this instance he’s talking about people who write non-fiction information. He provides examples from government pamphlets that are designed to give people instructions to help them in whatever situation.  These pamphlets were largely incoherent because they assumed the reader had the type of informed background that allowed them to understand the rhetoric used.  Wow.  The government using our tax money to furnish us with useless material.  Surprise, surprise.

Other chapters deal with shaping ideas after the writer has done his research but before he starts writing his book, the art of readability, developing an ear for writing (how to write as we talk but not really), degrees and results of plain talk and how to be human even when writing factually rather than creatively.

Every chapter is loaded with examples from writings from newspapers, journalists, government legalese, magazine articles and advertisements, to name a few.  Thanks to these I now also own a book from Pulitzer prize winning journalist Hal Boyle (“Help, Help!  Another Day!”-funnnnnyyyyy!!)  For each topic Flesch examples of both good writing as well as bad (like aforementioned government pamphlets).

Two particularly interesting chapters are devoted to showing how our sentences have shrunk over the ages but our words have expanded.  He compares English prose by Hakluyt written about 1600 AD to a modern passage.  Hakluyt’s sentences average about ninety words per sentence while the modern essay only had twenty! Nevertheless, he asserts that “Our sentences have grown shorter in number of words, but these words themselves have grown longer and richer in meaning.  And while we don’t need so many words any more to express our thoughts, the words we do use carry a much heavier load of ideas.   He concludes that “our modern short sentences are an illusion as far as ideas are concerned”.


Feslcher adds an appendix at the end of the book that includes a readability formula and a reading list which sites the sources of all his examples.  I found this useful so I could look up books I could order for myself (as I already mentioned.)

My verdict?   A great book to add to a writer’s library.

Sounds to be a very helpful book. When many people think of writing I guess the first thing that comes to mind is the kind of stuff that we bloggers read and actually write about.

However, I actually write a lot of technical and training material for my job. This book actually seems to address that type of writing.

You're a technical writer, Brian? I didn't know that. That's interesting. There's another book I'm going to review. It's how to get work as a writer and it includes technical writing.
I think that you would enjoy this book and it deals a lot with the mechanics of non fiction writing such as what you do in your job. Have a good day!