Men at Arms by Evelyn Waugh 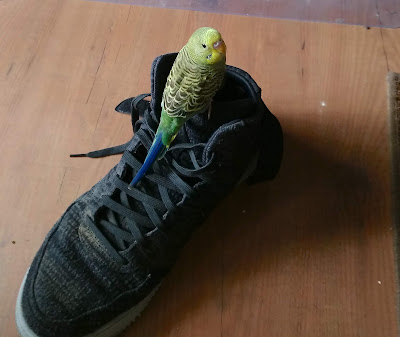 I can't remember if I introduced you to our latest addition.  This is Columbo.  Hercule was being less than friendly to Lt. Foyle so I got him a little friend his own size.

And here is Liszt's lovely Liebestraum.  I alliterated that without even trying. 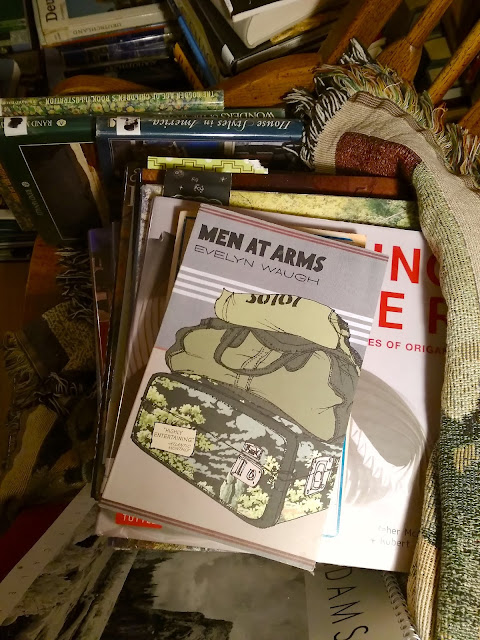 Men At Arms by Evelyn Waugh


This is the second book I have read by Waugh. The first was Brideshead Revisited and while it was interesting, it was a bit morose.

"That little tick wants his bottom kicked, " said Major Erskine. "I think I shall kick it. Good for him and pleasant for me."

That is my favorite line and I like repeating it to myself. That is also a good sample of the wit Waugh exercises on every page of Men at Arms.

Consequently I liked Men at Arms much better than Brideshead Revisited. Our hero Guy Crouchback is too old to enlist for WWII but wants to and finally is accepted into the Halbediers Unit. He is one of two older men, the other being Apthorpe. Both of them go through preliminary training with young men who call them "Uncle". Finally they are sent off to war and we learn how they fair there.

Most of the book takes place during their training time and we meet quite a bundle of interesting characters. Waugh is able to make his characters comical without being cartoony, which I appreciate. This book is really funny, even though it deals with a serious subject matter.

The story is from Guy's point of view, but with third person narration. One could almost feel sorry for Guy as we see the younger men try to take advantage of him and Apthorpe himself seems to manipulate Guy in ways that Guy can only appreciate later as a less than fortunate thing.

But Guy has strains of tenacity and learns to fend for himself, while he circulates with men, some of who are not altogether sane.

I won't give away the story, there isn't much of one. This is a character-driven book and the characters are interesting. Not a dull one anywhere and if you enjoy reading about the funny and sometimes zany antics of a bunch of grown men trying to prepare themselves to fight in a war, you will like this book. 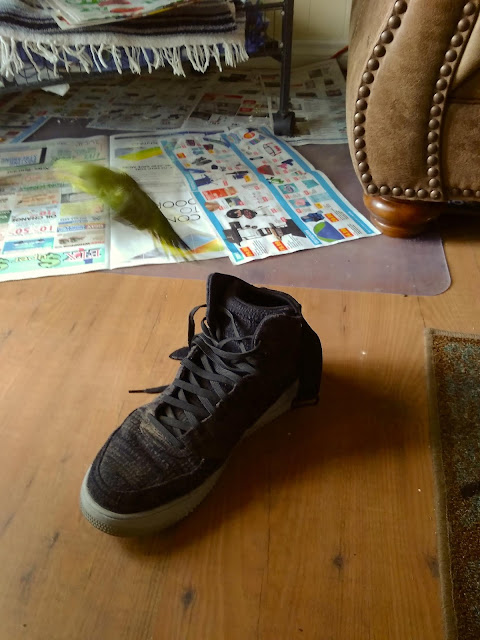 Posted by Sharon Wilfong at 7:52 PM

Sounds great! I had Brideshead Revisited on my list but perhaps I'll replace it with this one. And I love the new edition to your family!

Hi Sharon- I have not read Waugh. I had vague notions of reading Brideshead Revisited someday. Based on your commentary I think that I might like this better.

Colombo looks to be a very fine addition to your household.

i could well be mistaken, but Colombo looks like he has an attitude... "what evil lurks in the hearts of... parakeets...". i've read several of Waugh's books and liked them; and i think i've read this one but i just can't recall... but the protagonist's name is very familiar... Scoop, Black Mischief, and the Sword of Honor trilogy were all good and funny in that Waugh sort of way... i thought so, anyway....

Sharon, regarding BH, what do you mean by “morose”?

Thanks, Cleopatra. Lt. Columbo is a spunky little thing.

I liked Men at Arms better than Brideshead, I'll be interested in any future review of yours.

Hi Brian. I did like this one better than Brideshead.

Hi Mudpuddle. Lt. Colombo most definitely has a little attitude. Parakeets are tiny but large in personality.

Men At Arms is my second Waugh. I plan on reading the ones you mentioned.

Hi R.T. Maybe "morose" isn't exactly the right word. I meant that it had an overall depressing mood to it. None of the people had anything likeable about them and the story was negative.

Oh good. I've read Brideshead and A Handful of Dust. Liked both but didn't really love either. This does sound intriguing.

Hi Joseph. If you read it, let me know what you think.

Brideshead is on my TBR list, but I think I'd enjoy this one as much! My family and I have been watching an old TV series called "Dad's Army" which has similar subject matter, of the older generation in WWII. Granted, the TV series is a comedy, but it does make you think about how difficult it would have been for those people.

HI Marian. Dad's Arm sounds good. We also like Foyle's War which is a show about murder mysteries and takes place during WWII. I do like seeing vicariously what it would be like to live then.

Welcome to Columbo; I hope he and Hercule become fast friends!