Sands of Mars and The Deep Range by Arthur C. Clarke 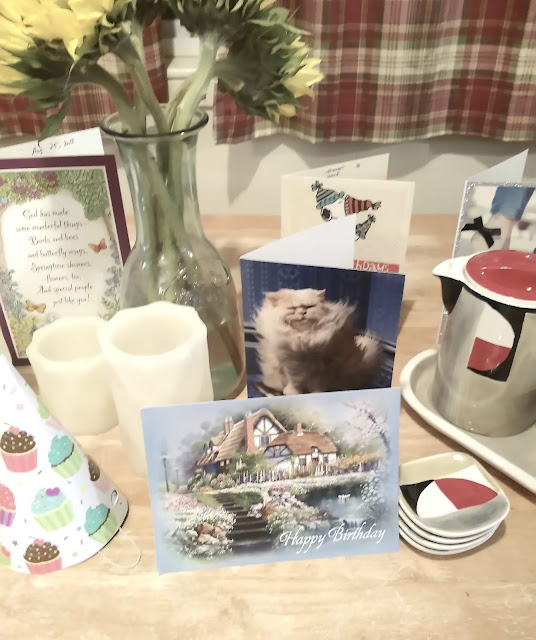 It was my birthday last Saturday.  I always love my birthdays.  First of all, I am thankful to be alive another year.  I have friends who have not been so blessed.  As usual I got exactly what I wanted.  My husband gave me the modernist tea set.  I love this kind of art. 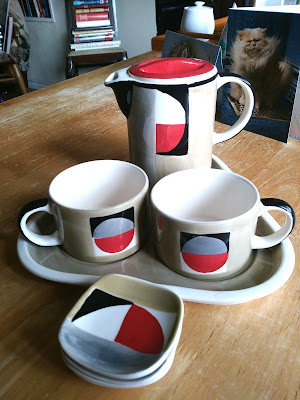 Here is Mozart's Symphonies nos. 40 and 41 to make the next hour of your life joyful.

Here's two reviews on a couple of Science Fiction books I read, both by Arthur C. Clarke: 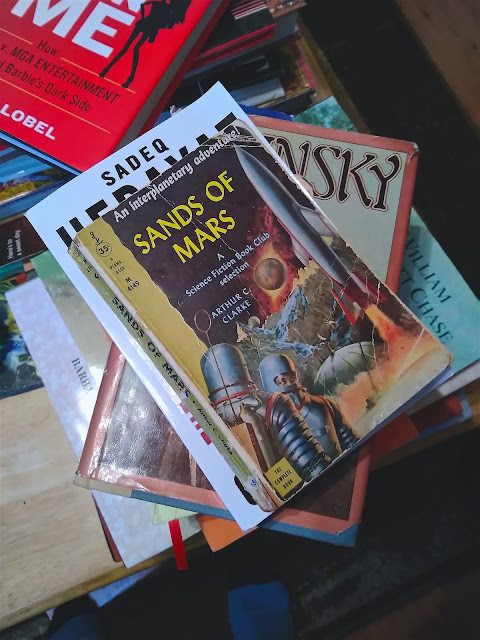 The Sands of Mars by Arthur C. Clarke


I am attracted to Science Fiction from the first half of the twentieth century. I like the cover art from the paperbacks; I like the retro feel from the stories too.

If you like books based primarily on world building, then you will enjoy this book. If you depend more on a story-line with an arc and characters that are well-developed, this story may disappoint.

Martin Gibson is a writer and he has been selected to fly on a spaceship to Mars and send back news to Earth. Earth wants to know if the efforts and financial expense to colonize the planet is worth continuing. Mars hopes that his reports will encourage their home planet to continue their support.

The first half of the book takes place on the ship where Gibson learns his way around and gets to know the astronauts. Each astronaut has a strong distinctive character and I am sorry that they did not play a larger role in the story. As soon as the ship lands on Mars, they all but disappear and the story shifts to Gibson's observations of the land he sees and the work the colonists have done to make it inhabitable for humans.

Maybe this would have been interesting if it was non fiction, but just reading one person's idea of what living on another planet would be like is not my cup of tea, but other readers might like it. For me it felt like reading a text book on ecology.

There are moments of tension, but they are brief. Mostly it's comparable to a mechanical Disney ride where one sits and observes the scenery while your cart takes you around the different "lands".

If you're a Six Flags type of person, you might go for something with a little more suspense. 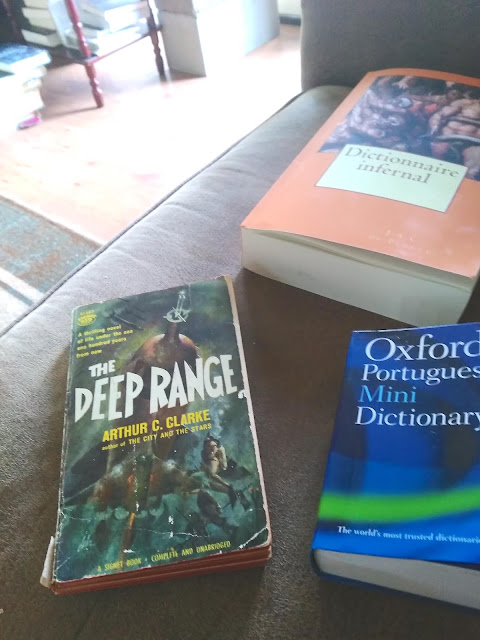 
Like the last Clarke I reviewed, this book relies heavily on world building. A plot is practically non-existent. Clarke simply wants to share a possible vision for the future.

Walter Franklin was an astronaut, with a wife and children on Mars. A traumatic experience on his spaceship left him mentally and emotionally disturbed. He cannot return to space and is therefore stuck on Earth for the rest of his life. His family can never join them because since they were born and raised on Mars, their bodies are too light for Earth where the heavier gravity would kill them. A convenient caveat Clarke arranged in order to justify his story line, which is to give Franklin a new love on Earth, even though it is peripheral to his main idea.

Franklin now works at a Marine Center where he has learned to drive underwater subs to monitor sea life and maintain herds of whales which are used as sources of food, the way cows are now.

With his new co-worker, Don Burley, we see a future world underwater and how it functions to support human life.

As I have said, there are few bumps in Clarke's story. He just wants us to envision what life would be like a hundred years from 1957 and how life would operate. I found a lot of his descriptions about as interesting as reading a "how-to" manual because much of what he writes is, well, how to operate a sub, how the sub operates in the water, herds whales, fends off killer whales and sharks etc...

I would have liked a little more development between Franklin and Burley, there was a lot of potential there that he only touched upon as they start their relationship cynical and distrustful of each other, eventually allowing a grudging mutual respect to finally admiration and friendship.

The woman he marries on Earth is interesting-she's a marine biologist who studies vitamin levels in shark livers- until they marry, then she is relegated to the background as someone he kisses good bye as he leaves for work and the mother of his children.

Again, people who like world-building and don't care about character or plot development will enjoy the book. 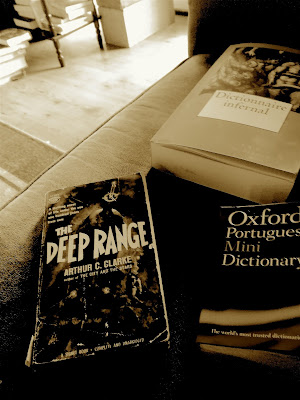 Posted by Sharon Wilfong at 8:48 PM

I have not read either Clarke book. I have read several of his later works. Though more developed in plot those books also were lacking in some ways. Clarke had a grand imagination but his portrait of human interactions was often lacking.

Happy birthday! Isn’t it odd that we celebrate something over which we had no control. Helpless at birth, we must learn quickly how to breathe, eat, and function in a brave new world we reluctantly entered.

love Mozart: as has been said, listening to a bit of M is like turning on a light bulb... i loved Sands of Mars, also: it was just the ticket for a querulous 11 year-old... Clarke was one-of-a-kind with his own style and not strictly a sci fi writer: much of his work is better classified as fantasy or even horror... haven't read Deep Range; it sounds interesting... i've been bemused by the fact that lived all his life in LA and never got a driver's license...

Hi Brian. Thanks! Mozart is wonderful.

I did not know that Clarke wrote the Space Odyssey, which I've never watched. His human characters start out so strong, but then are pushed aside for the sake of the imaginary world he creates.

Thanks, R.T. I hope you're feeling better. Praying for your health!

Hi Mudpuddle. Really? I did not know that about Clarke.

I think as a teenager and college student I would have really enjoyed these books. My twenties was when I read a lot of sci fi. I think now my tastes have run more toward the human condition and character development and interaction.

As for Mozart: I couldn't agree with you more.

Well, I'm not a sci fi fan...though if a book has a dystopian slant, I may be interested. But I haven't read much sci fi. Nonetheless, today I saw this, so your post made me think of it. I'll share it w/ you, since you said you are attracted to sci fi, and maybe you'll find some from 20th c. sci fi.

PS Hope you had a great birthday! Your tea set looks rather sci fi-ish. : )

Hi Ruth. I'm not the sci fi fan I used to be. I really only like the ones that run more like detective novels. Thanks for the link; I'll go there right after this.

I agree about the tea set. I've really been getting into modernist/retro art lately.

Thanks for commenting on these two books by Clarke. I've enjoyed some of his more famous work so will look forward to these. He surely does have a flare for imaginative leaps, reminiscent of Wells who also often let his ideas overwhelm his characters.

Hi James. I have heard of Clarke but these are the only two novels of his I have read. I've never even seen Space Odyssey. My husband really likes him so I'm sure we'll be getting more.

i owe you an apology: somehow i inadvertently confused Clarke with Ray Bradbury; i don't know how, as they lived on opposite sides of the earth... the latter is the one who passed away recently, lived in LA, and never drove a car...

not only that, i misspelled antarctica in the title of my last post... something happening here... must be that age thing they talk about...

Well, I didn't know that about Bradbury, either. Good to know! :)

I'm a lousy speller myself. I think it's getting worse. You won't believe how long it took me to figure out how to spell "squawk" (read my next post). In fact. I need to go read your newest post.

Happy belated birthday, Sharon. I read a lot of sci fi in my late teens & used to watch The Twilight Zone but I'm more interested in dystopian books now.
Are you learning Portuguese??

Hi Carol. What sort of dystopian books do you like?

I am not learning Portuguese per se but I can read it with the aid of a dictionary because it is so similar to French and Spanish, two languages I can read (but not fluently). There's a couple of authors I found on Goodreads whose books are not translated into English.