In the Fog by Richard Harding Davis; The Big Knockover : Selected Stories and Short Novels by Dashiell Hammett; The Flemish House by Georges Simenon


While writing these reviews, I have been listening to a collection of Bach Chorales.  If you like Baroque choral works, you will enjoy these.  When Bach wrote these, hymns were limited to Latin chants.  It was considered radical at the time, but Bach took the chorales and put them into the language of the people (in his case, German).  One of my music professors, who was Catholic, said Bach's Chorales stripped away the sense of the mystical away from worship when he did that.  Well, I disagree.  I think, regardless of your personal beliefs, you can enjoy well-written music. 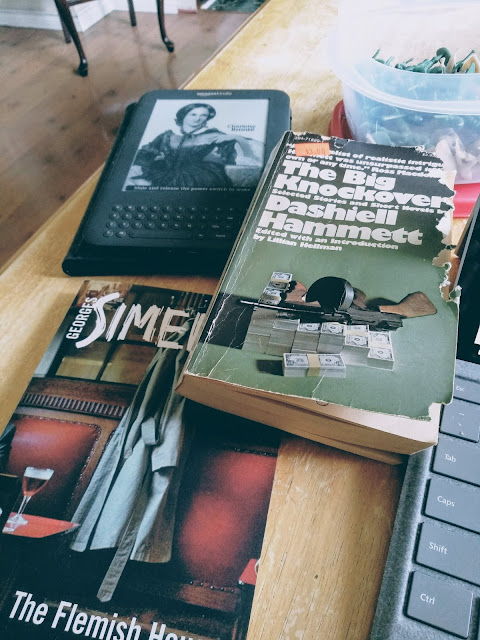 In the photo above you may notice some toy soldiers.  I got these for my birds so they wouldn't chew on my books.  You can see how successful that has been.  Incidentally, I bought some books at the dollar store to give them to chew on.  Naturally, they are in perfect condition.

This is what is happening on my shoulder while I am trying to type.  It's how I divert the little green monster so he doesn't chew on my phone, Kindle or computer.  Or books. 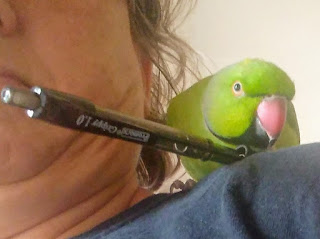 Maybe I should make my own Godzilla movie.  Hercule the Terrible. 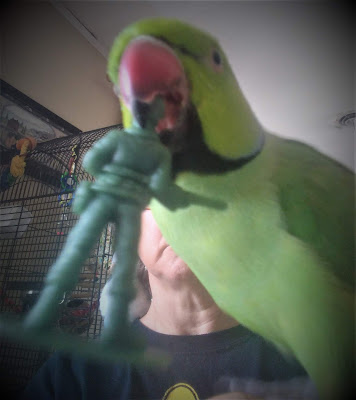 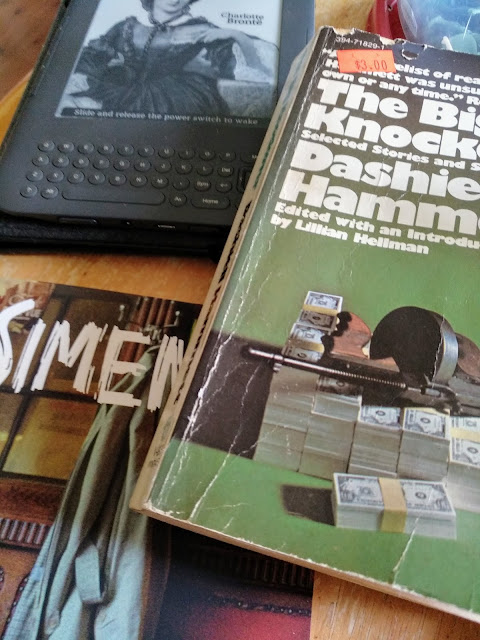 Because my mystery reviews are kind of short, I thought I would publish three of them all in one blog post.

In the Fog by Richard Harding Davis
My rating: 4 of 5 stars
This was really a fun short mystery. A group of men are at the club, you know, back in those days where men had dinner, drinks and cigars at men only locales, at least in England. I don't know if that tradition made it across the pond to here. On the other hand, here in Texas, good old boys and cowboys do enjoy meeting at local diners to just hang out and "chew the fat" as it's called.

As I was saying before I diverted myself, four men are seated around a table, four strangers as it were. One, known only as "the man with a pearl" is talking out loud to himself, but his companions soon join his conversation.

The man's complaint is toward another man who is seated in a comfortable chair in front of the fire and out of hearing. He is engrossed in reading the newspaper.

The man with a pearl laments to his companions at the table that the man yonder is a VIP in Parliament and is trying to get a particular bill passed. The vote will soon arrive and he wished he knew of a way to detain the man in order to keep him from making any influential speeches in Parliament.

One of the other men comment that the man seems to be an avid reader and quite an intellectual. The man with the pearl snorts. No! The man only reads mysteries.

Soon the man in question folds up his paper, puts it under his arm and makes his exit.

This intrigues the Parliament man (sorry, I don't know what else to call him. Let's say P.M.) and he stays to hear the story.

What happens next is all the men at the table conspire to detain the man so each pick up the thread of the story when the previous man finishes.

Each story is complete in itself and very diverting, as the P.M. also finds and is glued to their every word.

And the ending is one of the best I've read in a long time, but I refuse to say more. Read the story for yourself. I'm sure it's in the public domain. I bought it as a part of the British Mystery Pack for my Kindle.

The Big Knockover: Selected Stories and Short Novels by Dashiell Hammett
My rating: 4 of 5 stars
This was a group of short stories, the first three connected to each other and longer stories, mostly starring our un-named Continental Operative. Those are my favorite. They have all the ingredients of a great story and I enjoy following the short, heavy-set detective around as he gathers up clues, makes discoveries and finally at the very end, gets the bad guys, although he is also adebt at letting the bad guys get each other. Saves on court costs and taxes.

Some of the stories take place in San Francisco, where the Op is stationed. Some specifically in China Town, one in an island of the coast of San Francisco and a couple away from 'Frisco on a ranch and lawless cowboy town.

If you like mysteries and hard boiled detectives, Hammett is the master and you'll enjoy these stories. The table of contents are:

The Flemish House by Georges Simenon
My rating: 4 of 5 stars
Another Maigret. What can I say? I cannot stop reading about this Parisian detective.

This particular mystery does not take place in Paris, however, but on the Belgian border in the town called Givet. Maigret is not officially on duty, he only comes because a young woman has specifically asked him to. So while Maigret assists the detective in charge, Monsieur Machere, he insists that he is not responsible for anything.

The woman, Anne, and her family are Flemish and not especially liked by the French inhabitants of Givet. To make matters worse, a young French girl has disappeared. It is feared she has been murdered and the number one suspect is Anne's brother. After all, he has the biggest motive: he got the girl pregnant and he is paying a lot of money every month to support, not only her and the baby, but also the nanny of the little boy, and also her lout of a brother who is constantly demanding more and more money.

But did he? Did anyone else have a motive for killing this girl?

That is what Maigret sets out to discover..

Possible spoiler, read on at your discretion:

My only quibble with the entire book is the lax attitude Maigret seems to have with right and wrong. He seems to think it is not his responsibility to administer justice, even with a murderer, since he is off-duty.

My small, blue T-Rex would rather nibble on me. 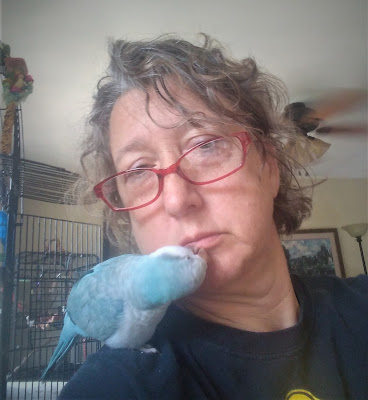 Posted by Sharon Wilfong at 9:13 PM

Hi Sharon. Sorry to hear that the toy soldiers were not able to deflect to attacks of your books. It seems that they made a valiant effort though :)

All the stories sound good. I have been meaning to read Hammett for years. Maybe I will get to him over the next few months.

the parakeet's revenge! there's a book in there somewhere... Richard Harding Davis used to be a really popular author; i've read some of his stories but not this one; i'll have to look into this... i like the continental op also; maybe because he's a more Sherlockian type, comparatively speaking... i'm not that crazy about Simenon; i've enjoyed some of his work, but it doesn't have great attractiion. interesting about the Bach Choral works: i'll bet there's some controversy about that...

This is one genre I have never gotten into. I mean I haven't read any mystery that I can recall. Someday, I suppose.

Thanks for sharing Bach's Chorales. I reminds me of our Medieval year, though we did not study him until our Reformation year. But it was interesting to see how music grew from the Gregorian chant.

HI Brain! You have given me an excellent idea for a picture story. I made one with my guinea pigs for my nieces (A Day in the Life of a Pig). I should make some kind of epic with Hercule and toy soldiers.

If you have time to just read a little fun stories, these are the ones.

HI Mudpuddle!
Yes. You and Brian have given me an idea. I think a great photo story is in the making.

This was my first Davis. I think that a lot of the stories in this British pack collection have some forgotten authors.

Hi Ruth. I never read much mysteries. It's funny how our tastes change over the years. For the past couple of years I've been devouring mysteries on the weekends as a break from my normal reading of non fiction and "heavier" books.

Maigret often has a loose grip on the ethics of right and wrong.

Ooo, I had a lovebird who used to LOVE to chew books. They're a bird's paradise!

I've stayed away from Hammett ever since The Maltese Falcon. It's good to see your 4 out of 5 stars. And I do have to read a Maigret soon ... I'm looking forward to it.

Hi Cleo! Lovebirds are adorable. I have enough birds right now, but I've been tempted to get a couple of Lovebirds. Maybe if I ever move into a bigger house.

You know, I really didn't like the Maltese Falcon either, or the Thin Man stories. I thought they were boring.

These collection of short stories about the un-named continental op were fun to read, however.