Jack the Ripper: A Chilling Insight Into One of the World's Most Infamous Killers by Geoff Barker

Here is Papa Haydn's Piano Sonata in B, no. 47, played by the brilliant Emmanuel Ax. 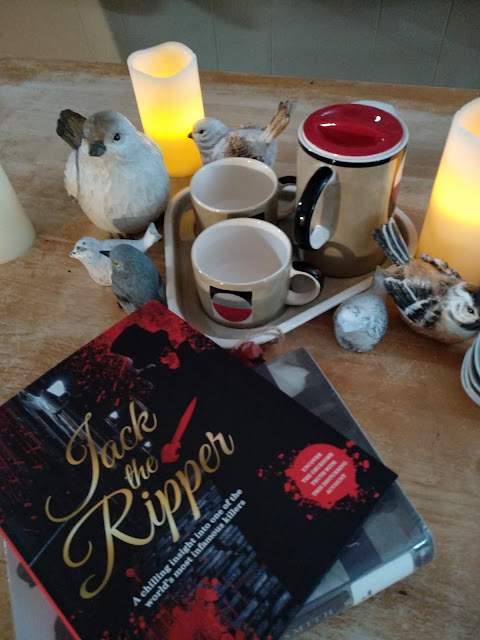 Jack the Ripper: a chilling insight into one of the world's most infamous killers by Geoff Barker
My rating: 4 of 5 stars
I am writing my own "ghost" story and I mention Jack the Ripper in it. As I was writing, I wondered if my information was accurate. Jack the Ripper is a nefarious legend about a serial killer, his victims were prostitutes but that was as far as my knowledge went. I did not want to include erroneous information in my book, even if it is fiction.

As I was visiting my local bookstore I came across Jack the Ripper: a chilling insight into one of the world's most infamous killers by Geoff Barker. It was on sale for five dollars. Well, who could resist such an enticement? Not me.

This book is good for a number of reasons. It's not very long, imminently readable, and filled with illustrations and photographs, some a bit graphic, so please use discretion. It's not a children's book.

Also, the author is methodically thorough. He starts with the part of Victorian London where the murders took place, giving the reader a history of the neighborhoods and people who populated them. He provides maps to show the neighborhoods and also the scenes of the crime. He also provides information as to where to find those sites today, since some of neighborhoods have changed considerably.

After that we get a couple of pages for each murder victim. There were five that are recorded as positively resembling each other enough to create the conclusion they were done by the same hand.

What's nice is that we get a brief history of each woman. She's not merely a murder statistic, she's a person who has her own history that abruptly stops with her murder.

What all of the women had in common was they were alcoholics that supported themselves through prostitution. What I found interesting is that none of them started out that way. They started out married with children, even coming from working class households. However their alcohol addictions ruined their marriages, caused them to desert husband and children and basically live from one bottle to the other.

The scenario is similar with each case. They spent their money on drink and then couldn't pay for their night's lodgings, so they went out to ply their trade to get enough money to pay for a night's lodging. Little did they know they would not be needing lodgings that night because they would end up at the morgue.

I mention this because I think I tend to think of these women as poor helpless, born into poverty and as a result they took to drink to drown their sorrows, so to speak. This book does not paint that picture at all. They started out well off with a working husband and family and it was the alcohol that caused their degradation into poverty and prostitution, not the other way around.

Barker tells us details of the serial killer by how he killed. It was always with a knife and, well I won't write the details because they're gruesome, but just to say that the method of killing seemed to indicate someone with medical knowledge, which lead some to suspect the murderer was of the medical profession.

However, there are several suspects and this is how Barker rounds up his history. He describes each suspect and why they might be Jack the Ripper. One reason these men are suspected is because they died or ended up in insane asylums, or left the country which would explain why the murders after a couple of months abruptly stopped.

I read this book in one sitting. And, as perverse as it sounds, I'm glad to finally know the facts about this horrible legend. 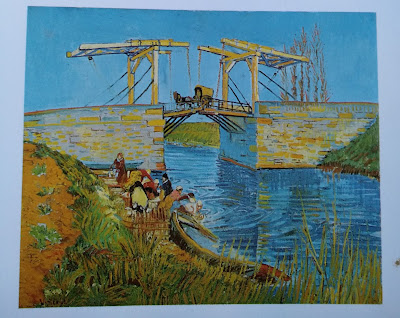 A postcard I sent to someone who likes Van Gogh.
Posted by Sharon Wilfong at 8:27 PM

Hi Sharon. This is so interesting. I also did not know that the killer’s victims started out stable and ended up falling so far. The book sounds very worthwhile. I think that there are a lot of single theory books out there that push a single theory as it who the killer was. This book seems to give a balanced overview.

HI Brian. I thought this was a balanced and informative book. It simply gave the facts, but ultimately I don't think we'll ever know.

I'll let you know when my story is published and ready for an audience. No pressure. Ha,ha.

i've always known ladies are the stronger sex... i'd be catatonic if i read this... i didn't even read your excellent review... a little bit maybe...

It's funny you say that. My husband is a delicate flower if I dare mention any kind of female biological function. He absolutely does not want to hear about it.

However, I did not graphically describe anything in this post. The book does not either, or at least not in a gratuitous sense, only in a clinical one.

Great to have you back, mudpuddle.

we all live in our own universes...

I can handle this sort of topic in fiction but not so much in real life & I didn't know that the murderer had never been caught. I just finished reading A Mind to Murder by P.D. James - set in a psych clinic & the murder was committed by someone with medical knowledge. Have you read any of her books? I think her writing is excellent from a literary point of view but sometimes she gets too graphic for me.

HI Carol. I have never read P.D. James. Funny, I don't like graphic violence in my fiction. Actually I only read this because I wanted accuracy in a book I'm writing, and since I read it, I figured I might as well review it.