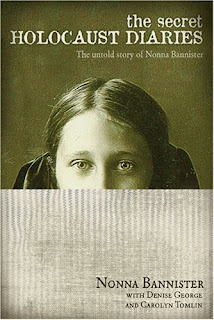 The Secret Holocaust Diaries are the memoirs of Nonna Bannister. Nonna grew up in a wealthy Russian family with ties to the Tzar at an unfortunate time. The Bolshevik Revolution took place some time earlier and Stalin had come into power while Nonna was still a young girl. As living conditions worsened, her father, Yevgeny, sought an escape for their family. So when the Germans invaded Russia in 1941 he kept his family in their residence even though Stalin had ordered all Russians to move farther east. While this decision would mean being labeled as traitors by the Russian government, Yevgeny hoped that the Germans would provide an escape from a regime that was destroying its own people. (Nonna describes going to church with her grandmother and walking past hundreds of people lined up outside the building begging for food- part of Stalin's Holodomor, genocide by starvation that took up to 8 million lives.)
As it turns out the Germans did provide a way out of Russia but in a horrible way. Yevgeny was brutally murdered by German soldiers and Nonna and her mother, Anna, were taken away in cattle cars to German slave labor camps. (She also had a brother but he was taken away to join the Russian army earlier and she never learned of his fate.) Sadly, Nonna was the only one to survive; she and her mother were separated when Anna was taken to a concentration camp for attempting to rescue a Jewish baby from German guards. Her death there is too grievous for me to write here.
After the war, Nonna eventually made it to the United States and settled in Tennessee, marrying a nice southern man and leading a “normal life”. All her nightmarish experiences are kept hidden away in a trunk in the attic. In her old age, Nonna showed her husband her diaries, written in several languages and with the help of him and Christian publishing editors her story was translated into English and put in book form. Her request that it not be published until after her death was honored.
As terrible as her experiences are, Nonna does not fail to infuse her story with the love and joy she knew while with her family in Russia and she clings to those cherished memories of her beloved parents and brother throughout the horror that she endured at the hands of two despots. What also never falters is her Christian faith. It is interesting to see a stout Orthodox Russian eventually join a Southern Baptist church and if she were alive, I would love to ask her about her opinions of the two drastically different denominations.
Nonna Bannister's story is as heart rending as it is gruesome; nevertheless, hers is a story that must be told and preserved.
Posted by Sharon Wilfong at 6:03 PM

have you seen this web site? super wonderful on a lady who saved 2,500 children from the death camps.

I'm glad to know about Nonna. Your heart and head must be full of so many emotions from reading these accounts. How do you process all this pain and heartache?