Josh and I went to a nearby town to get our Cuckoo Clock fixed.  The only Clock shop this side of Dallas that fixed Cuckoo Clocks belonged to an ancient little man in Jefferson.   And he only took cash so it was with some trepidation that we handed over our clock to him.  Spoiler alert:  He fixed our clock but it took forever to find him and finally get our clock back.

His store is like something out of a movie.  This is parked out front.  It is for sale if you're interested. 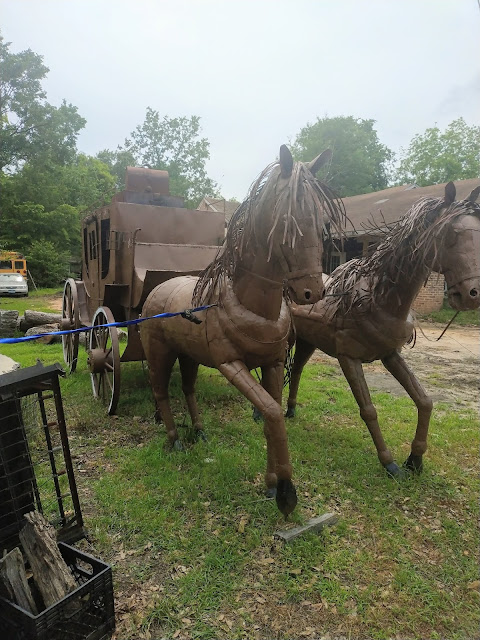 Back home and merrily cuckooing and playing The Happy Wanderer while the tiny couples dance. 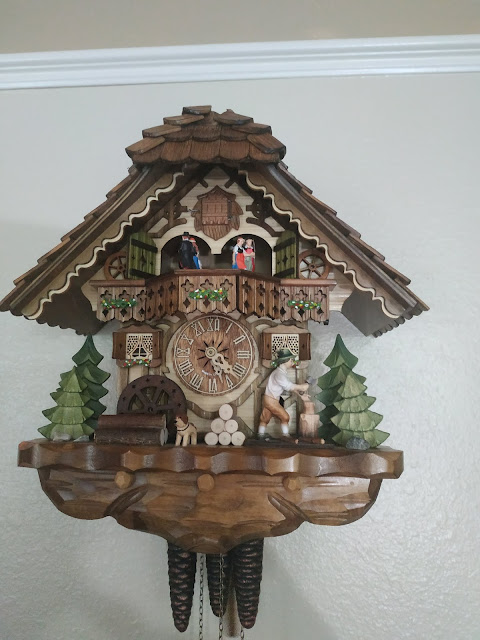 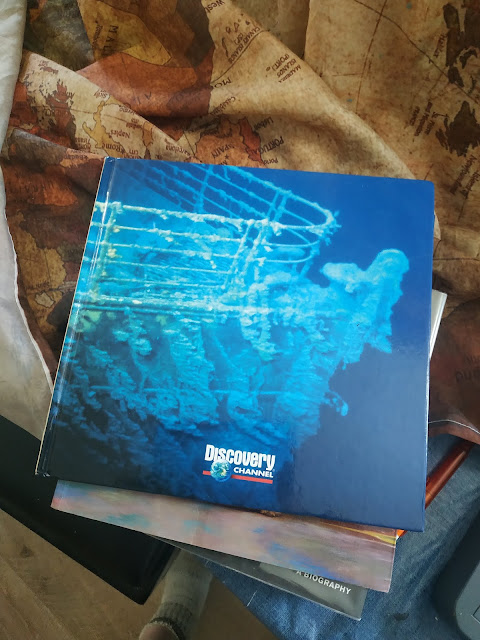 I always like learning about a famous historical occasion and really getting into the point by point time line and detailed information.

This large book with its glossy photos and illustrations does not disappoint. Susan Wels provides contemporary photos of the Titanic on the bottom of the Atlantic, historical photos of the ship and passengers, and several of the artifacts that have been uncovered by the teams that have developed the technology to make it happen.

Wels first provides a history from the building of the ship to the landing of the survivors in New York.

The second section provides a detailed description of the the efforts to find the Titanic's resting place through the years and then the science, technology and scientists who made it finally happen.

Interesting to me are the people who think the Titanic should be left alone on the bottom of the ocean. Their argument is that way the ship and her possessions will belong to all and honor the memory of the dead.

Baloney. Such arrogant presumption to speak on behalf of people who have been gone for over a hundred years.

I'm glad that International Treaties have been created to make sure that individuals don't pirate the treasure of the Titanic, but I think it honors the memory of the passengers, both living and dead (although I doubt any are alive now) by preserving the artifacts in a public museum so we can all come into contact with the past.

I sincerely hope they are able to bring the three sections of the ship up before it finally dissolves into the ocean. 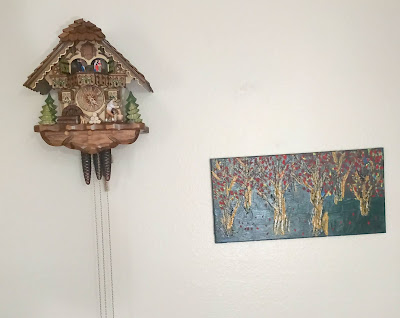 Posted by Sharon Wilfong at 3:31 PM

i'm glad i wasn't on it. it's hard to credit that they weren't keeping a lookout for icebergs: too much partying i'll bet... i saw in the last post's comments section that you're thinking about switching to Wordpress? i did the opposite last year because it got so WP wouldn't publish any of my posts. so far Blogspot has been pretty easy to work with; of course i just have the simplest site i could get mainly because i'm computer illiterate... let me know what your new address will be?

You left wordpress? I thought you changed from Google to Wordpress. What kind of problems did you have? I'm afraid of losing my subscribers.

i just couldn't get them to print my posts any more; it was easier to switch than to continue fighting... as i mentioned, i've got a really simple format with Blogspot and so far it seems to work fine, but evidently that's not the case for you... good luck with what ever you decide to do!